The ‘All Eyez On Me Trailer’ Leaves Expectations Unresolved 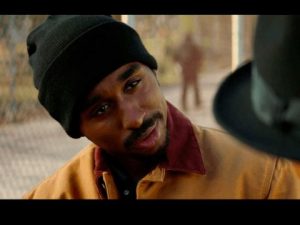 Biopics have quickly risen to become an expected part of film slates every year. And with films like Straight Outta Compton and Notorious, the lives of prominent rappers have become profitable subject matter. But will the upcoming Tupac Shakur biopic All Eyez On Me live up to the hype?

There is more than sufficient reason for hype. The cast sports both serious star power and close ringers for the celebrities featured. Demetrius Shipp Jr. is a close match for Tupac. Danai Gurira seems to fully embody the recently departed Afeni Shakur. And Jamal Woolard, who starred as The Notorious BIG in Notorious, reprises his character. But finding lookalikes, even those able to emulate the voices and movements of their characters, does not equate to producing a powerful film.

Directed by Benny Boom and executive produced by Afeni Shakur and Wayne Morris, the general consensus is that the story will stay true to the rap icon. Still, when individuals are held up on such a high pedestal, it’s nearly impossible to please everybody. For a film like this, performance pieces and raw emotional performances will be vital. And with the first trailer leaning heavily on Danai Gurira’s compelling voice-over, I worry that the other actors might not deliver as powerful performances.

Other than Afeni Shakur’s words, the trailer doesn’t give us much to ruminate on. It appears to be beautifully shot, but the trailer predominantly features what amounts to beauty shots of Tupac, whether he’s smoking a cigarette or standing on a stage. And when you couple that with the comments John Singleton made when he parted ways with the film last year, there is sufficient cause for concern over the film’s content.

Real talk! The reason I am not making this picture is because the people involved aren’t really respectful of the legacy of Tupac Amaru Shakur. I won’t say much if you want you can read my articles in Hollywood Reporter on authenticity in Black Storytelling … To Pac’s real fans just know I am still planning a movie on Tupac … It doesn’t matter what they do mines will be better… Tupac was much more than a hip hop artist … He was a black man guided by his passions … Of most importance was his love of black people and culture … Something the people involved in this movie know nothing about… Real talk! How you gonna make a movie about a man when you suing his mother to get the rights to tell his story?! They have no true love 4 Pac so this movie will not be made with love! And that’s why my ass isn’t involved ! If Tupac knew what was going on he’d ride on all these fools and take it to the streets… But I won’t do that … I’ll just make my own project. What Yall think about that?!!