The Deafening Silence From Whites On Police Violence Is Incredibly Loud 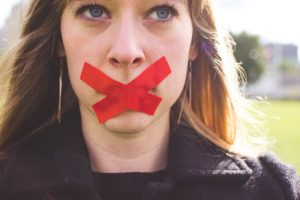 “Where the really sincere white people have got to do their ‘proving’ of themselves is not among the black victims, but out on the battle lines of where America’s racism really is — and that’s in their own home communities.”

Even as we are murdered in cold blood, in the streets, on camera, many Whites remain silent.

Last week, after Jesse Williams gave a phenomenal speech at the BET Awards, many White people took to the Internet to demand that he be fired for his “hate speech” and “racist rant” against Whites. They created a petition and even drew the attention of Shonda Rhimes (the producer of the show, Grey’s Anatomy, that Williams is on). While she quickly dismissed their concerns, it is rather startling that there have been no petitions, no marches, and very few outraged Whites demanding justice after footage of two Black men being murdered by police came out this week.

When I say startling I don’t mean surprising like I didn’t expect this to happen. Rather, I mean the kind of shock you get when you get passed over for a job you’re qualified for but it was given to a White person with fewer skills. Or, like the kind of sensation you get when a racist person yells slurs at you out their car window as you walk through your neighborhood. There is always a chance that these things will happen, you just hope they won’t. Then they do. As a person of color in the United States, these are frequent types of surprising yet constant disappointment that feels like a continuous breaking of America’s promises.

Alton Sterling, 37, was murdered in Baton Rouge, Louisiana on Tuesday morning. He was standing outside of a local store selling cds when someone called the police, claiming Sterling was harassing store patrons. Police arrived at the scene, pinned him to the ground, and shot him to death as he lie on the ground.

Philando Castile, 32, was killed during a routine traffic stop while riding in the car with his girlfriend and 4-year-old daughter. When he was asked to provide license and registration, he alerted the officer that he had a licensed gun in the car. He complied with the officer’s demands and attempted to get his license. The officer then shot him in the chest four times. He slumped over and died in front of his family.

While I have seen some White folks expressing sympathy or utter confusion about what to do in response, many have chosen to remain completely mute as people of color organize, collectively act, protest, and speak out about the murders of our people.

The thing about silence in the face of injustice is that it is a form of complicity. When anyone sits silently as another person or group of people is harmed, they are suggesting 1) that the harm is justified, 2) that they have no power or personal will to prevent further harm, and 3) that the harm is not important enough to beckon their extreme and acute action. This is not to say that White people are all invested in the murders of Black people at the hands of police. However, this is to say that once confronted with these conditions and circumstances (which are well-documented and historically anchored), it is all of our jobs to do something about it.

Have difficult conversations with friends and family members. Research these murders and statistics and discuss them on the Internet. Find a way to contact your local precincts and those where these tragedies have happened to demand justice. Just do something in your own space to stop the genocide against Black people.

A friend of mine made a great resource for White people who don’t know what to do next. This might be helpful for people who are still confused.

But, what you shouldn’t do right now is demand anything from Black people. Don’t take up space. Don’t argue. Don’t undermine. Just don’t be complicit.