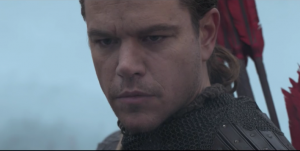 Recently,  Fresh Off The Boat actress Constance Wu offered a searing  critique of Matt Damon’s new film The Great Wall. Yes, it is about the Great Wall of China and white Matt Damon is the lead.

In her comments, Wu pushed back on the idea that all the heroes in big films have to be White men (I would add or white women but…yeah.). I couldn’t agree with her more, but I also know that for man white people, “White” and “Hero” are synonymous terms. This is because mainstream media operates not by challenging the status quo but by exploiting it, no matter the consequence to people of color, women, and queer folx.

Wu was very clear about her issues with Matt Damon’s new film. In an extended post on Twitter she said,

“We have to stop perpetuating the racist myth that a [sic] only white man can save the world. It’s not based in actual fact. Our heroes don’t look like Matt Damon. They look like Malala, Ghandi, Mandela.”

She continued by saying,

“It’s about pointing out the repeatedly implied racist notion that white people are superior to [people of color] and that [people of color] need salvation from our own color via white strength. When you consistently make movies like this, you ARE saying that. YOU ARE. Yes, YOU ARE. YES YOU ARE. Yes dude, you fucking ARE.”

Can we all at least agree that hero-bias & "but it's really hard to finance" are no longer excuses for racism? TRY pic.twitter.com/mvNet5PrtH

She is 1000% correct in asserting that people of color should see themselves reflected in the heroes they watch on the big screen. But, her point runs even deeper than that. When these movies are made, they don’t just serve as a source of entertainment, they also impact the ways viewers conceive of racial groups, genders, and sexualities. This is what animates criticisms of major awarding bodies like the Academy and the SAG Awards.

What is also a prime issue in this conversation is the fact that many white viewers would prefer not to see people of color as heroes at all. Let’s not forget the mass negative reaction when Hunger Games‘ “Rue” was played by Amandla Stenberg, a biracial individual with curly hair and an olive complexion. This happened again when Jeffrey Wright was cast as “Beetee” in the same franchise. The mere idea that characters that white people liked could be portrayed by Black people was enough to cause backlash and even threats to stop supporting the films.

This is because, in many white people’s minds, people of color – especially Black people – are stereotypes, not actual people. The “Blacks are criminals, Asians are the ‘model minority,’ and Latinx and Hispanics are ‘illegals,'” forms of thinking have only been promoted and sustained by media and production companies who would rather make money than challenge systemic racism.

It isn’t about just having more people of color on-screen and behind the camera either. It is about honestly addressing the ways that most profit-earning institutions in this country thrive off of racial inequality, injustice, and hatred. This includes our favorite technology companies, our food producers, and even actresses, film producers, and directors.

White savior movies are not just historically inaccurate. They are part of the reason our political imagination can’t conceive of a world where people of color are actual human beings. Maybe even heroes.