The Summer I Got ‘Woke’: On Black Death and Collective Grief 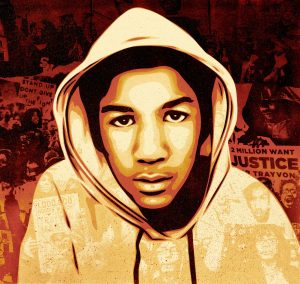 I can honestly say I was asleep pre-2009. It took Aiyana Stanley-Jones’ murder, Marissa Alexander’s trials, Trayvon Martin’s execution, and finally, George Zimmerman walking free to wake me up. Now, I’m what many would call “woke.”

Now, this is not a self-congratulatory post. I’m not perfect. I still make mistakes while doing this work. I am still (and always) learning. And, to be honest, I don’t get everything right.

Also, being honest means being completely honest. I was a very politically problematic person in my twenties. I had no critical analysis of capitalism and neoliberalism (I supported Disney – one of the most exploitative companies in the world – by giving them my labor and excusing their commodification of people of color). I had no real conception of sexuality and gender difference beyond “gay” and “straight.” And, what is worse, I had internalized decades of socialization about European beauty standards, tropes about “welfare queens” and “Black male criminals.” Suffice it to say, I was a mess. It took a lot of work to unlearn these lessons. It took years to wake up.

But, while I think I started the process back in high school when I first cut my hair to rebel against the creamy crack or maybe even back in junior high school when I started wearing combat boots and Jordan’s with dresses to push back against limiting notions of “femininity” and “respectability,” it wasn’t until July 2013 that I peeled away the final vestiges of white supremacist thought in my life.

I was seven months pregnant with my third child. I had just become a member of Delta Sigma Theta sorority and was attending our centennial conference in Washington D.C. Anyone who knows me knows that I am incredibly emotional. I get very excited and am extremely nostalgic. So, for me, walking in the District of Columbia, on land tilled by my ancestors, at the chapel on Howard University’s campus where my earliest sorors studied, toiled, and fought, filled my heart to the brim.

Yet, in the background, everywhere we went, the televisions were telling the story of Trayvon Martin’s death through the eyes of a murderer. That year, Zimmerman had become a household name, forcing many of us to consider issues of unwarranted persecution of Black and Brown people as an eminent and ubiquitous threat. Yes, this means that some of us (including myself) were under the impression that if we simply “behaved,” or maybe even assimilated into whiteness we might be protected from state-sanctioned or citizen-initiated aggression and violence. We were in a deep state of slumber.

During that year following Martin’s murder on February 26, 2012, I had watched footage of Rachel Jeantel as defense attorneys maligned her, suggesting that she was unintelligent, belligerent, and unfinished. I watched them pick a jury of (mostly) white women with no consideration for how that would affect the outcomes. I had watched Trayvon’s mother, Sybrina Fulton, and his father, Tracy Martin, lose all semblances of privacy as they were bombarded with microphones, and cameras watching them grieve the loss of their oldest child. I watched all of it. I discussed. I languished.

Yet, it wasn’t until one of our final events of the conference that I realized what was happening to me. As a part of the celebration, we had a concert featuring some well known stars and entertainers and hosted by Soror Sheryl Lee Ralph. We jammed all evening. We danced. But, during the concert, I got a text from my partner. It was July 13th at 9:07 pm. It simply said “Zimmerman not guilty.” Immediately Ralph came out and announced the very same news to what had to be at least 20,000 people in the concert hall.

The room fell deafeningly silent. I could see people illuminating their phones, trying to comb the Internet for updates, looking for explanations, searching for answers, finding nothing. Losing hope.

An evening meant to celebrate one another and our organization’s longevity became a moment for collective grief. My eyes welled up. Others around me were handing out and using tissues to pacify their pains. The room just kind of stood still. We were in mourning.

I remember scanning and scanning the room. It was so dark but everyone had phones out. We were having a spontaneous candlelight vigil. We even prayed together. It was in that moment that I started to acknowledge how I had been carrying the grief on my back like a hiker’s pack for months. I had been tucking away my grief and depression because I didn’t feel as though it was mine to express. Because I had been working so hard to just be “normal,” to get in the box that whiteness had been forcing me into since birth, it felt like a betrayal to my Black community to appropriate pain that I (in my mind) hadn’t earned.

I honestly believe that was the moment – if I could choose just one –  when I became “woke.” Folx often make light of the term or work to undermine it’s significance but, at least in my life, it was and is still a very real thing.

I always liken this process to a lesson I learned from Dr. Darrick Smith while attending Oakland Technical High School in the Try U.M.F. (Trying to Uplift My Folks) program. I will never forget the lesson he gave where he had us read Paulo Freire’s Pedagogy of the Oppressed while watching The Matrix. He told us that Neo being awakened from the Matrix was just like us awakening from acceptance of our own oppression. When Neo chose to take the red pill – exposing him to the cruel and disturbing realities of the world he had lived in – he was becoming “woke” and, simultaneously, opening a world of possibilities for his physical and mental strength.

Not to get all meta, but that’s what it’s like.

The process of stripping away the internalized hatred, the forced assimilation, the self-destructive attitudes and political beliefs is a tough one. It shouldn’t be discounted or taken lightly. I spent nearly thirty years learning how to hate myself and my sistren, brethren, and siblings in the movement. Why wouldn’t it be agonizing to excise that malignancy from my life?

While I am heartened by the fact that we are entering a new political moment where many young people won’t have to “get woke” because they will simply be born and raised that way, I am also aware that some of us are still in a deep sleep. Some deeper than others, but sleeping nonetheless.

I am working on having patience where those individuals are concerned and offering them grace. Lord knows I needed it when I first woke up. I’ll likely continue needing grace because staying woke isn’t really easier than getting woke. But, luckily, we are all here, collectively, working on it.