Geek Out Over the New (Super Black) Luke Cage Trailer 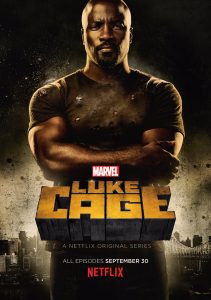 Netflix just dropped a super black trailer for the forthcoming Luke Cage series from Marvel. Pardon me while I geek out for a moment.

The few series that Marvel has brought to life through Netflix have all been immense successes. Critics and fans alike have been losing their minds over the well-crafted street-level hero projects. And the trailer for the next in line due to debut this September, Luke Cage, is 100% black.

First off, the majority of the trailer is set to “Walk On By” by Isaac Hayes. So right up front, you know Marvel and Netflix were 100% committed to blackness.

But then there’s the cast. Mike Colter looks strikingly reminiscent of comic book depictions of Luke Cage. Mahershala Ali as Cottonmouth, the series’ main villain, is intimidating and terrorizing to the bone. And Alfre Woodard as Black Mariah? You already know.

I’d be remiss if I neglected to note how Rosario Dawson’s return as Claire Temple speaks to the heart of the show in its own way. Other tying this world to the other shows already produced by Netflix, she also personifies heroism and a human capacity to care for those is need, just without superhuman powers.

Even though her screen time in this trailer is short, Simone Missick’s Misty Knight is already looking to be a scene stealer in her own right. Here, she looks as strong-willed as you’d expect a black woman on Harlem’s police force to be, and her words on the vulnerability of Harlem are nearly the high point of the trailer.

There is so much more packed into this trailer from comic references like a throwback to Luke Cage’s original costume to blackness references like Mahershala Ali standing in front of a Notorious B.I.G. painting and proclaiming “Everybody wants to be the king,” but Colter, whether he is raining down sheer carnage on criminals or acting as a protector of the innocent, appears more than capable of donning the mantle of one of the most legendary black comic book heroes in history. And September 30th can’t come quick enough.

Watch the trailer below!

After a sabotaged experiment leaves him with super strength and unbreakable skin, Luke Cage becomes a fugitive trying to rebuild his life in modern day Harlem, New York City. But he is soon pulled out of the shadows and must fight a battle for the heart of his city–forcing him to confront a past he had tried to bury.