No, We Can’t Recover From Donald Trump 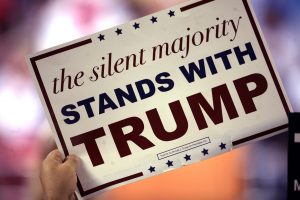 This past Sunday, a New York Times article asked, “How Can We Ever Recover From Donald Trump?” The inquiry and subsequent piece posit that Donald Trump’s run for the presidency has uniquely and catastrophically tarnished American politics, that he made nativism mainstream, and has the “bigots emboldened.” But, the fact is: we won’t ever recover from Donald Trump because he isn’t the problem. We are.

We might do well to look at popular children’s fiction for an explanation why.

My kids love the Disney movie Zootopia. It plays on repeat in my minivan during every trip to the gas station or the local grocery store. I have already commented elsewhere about the film’s merits in working through our debilitating issues with systemic racism and anti-Black sentiment in the United States. But, moving beyond that, the film’s protagonists and the obstacles they face mirror much of what many White Americans express when they gaze upon the racial and social conditions in this country today, including those in support of and in opposition to Donald J. Trump.

Specifically, there is a point in the film where the story’s pop star, “Gazelle,” comments on the growing species-vs-species tensions in the city, saying frankly, “This isn’t the Zootopia I know.” Her expressed disappointment with what used to be a great place to live struck a chord with me.

Since the line made it past the editor’s floor I can only imagine that the movie’s creators agree with the sentiment. They (much like the NYT Editorial Board) must, at least in some remote sense, believe in the idea that somehow, when cities, districts, counties, and even states erupt with ethnic or racial conflict they also magically transform from what we know and love into something else, something terrible, unrecognizable, maybe even something evil. It is as if racial and ethnic tensions have no histories. Like they are the results of sparks in the atmosphere with no explainable origins.

This is the same ideological commitment at the root of Donald Trump’s iconic, “Make America Great Again” slogan. The idea suggests that America, at some unknown time, was just…better. And now, maybe because a Black guy is in the White House and a White woman will likely succeed him, America just isn’t “great” anymore. But, what the editors at NYT and Disney seem to have missed is how ungreat this nation has been to a vast number of people. It isn’t about Trump per se (although he has done an astonishing job of catalyzing some of the ugliest mentalities and logics of the American citizenry). It is about us.

“Great” is incredibly subjective. So subjective that idyllic concerns about “recovery” seem even remotely plausible to some people. But, what are we recovering to? And what from? The idea that we can recover from Trump is like suggesting that a sick person will recover from pneumonia using diabetes medication. As Zootopia inadvertently suggests, many White Americans still struggle to understand that political uproar and disjointedness is a symptom of our longstanding issues rather than a cause of our systemic racial problems.

This preceding greatness seems to haunt us all in so many ways. We’re all tethered to a utopian (non-existent) society that was once so harmonious and pure. Granted, when many White folks say this they are talking about a highly segregated world where all the people with a single drop of any other blood (cause, you know, race is in the blood and we’ve all had our “race blood tests” done at least once) animates the colorblind, “post-racial” notion that all we really need to do is turn away, avert our eyes, and avoid our issues so that we can “know” a better place. In this way, “knowing” really means not knowing much at all, right?

For so many indigenous, Latinx, and Black folk, this is precisely the America we know and have known for generations. This is the America that would rather treat us like a smell one simply tolerates rather than a living, breathing cadre of bona fide human beings. The focus on Trump seems to have only distracted us from the fact that ideologies like nativism, anti-Blackness, and queerantagonism all stem from the same White capitalist, cisgender, heterosexual patriarchy that fostered the entire political system in the first place.

The NYT article closes by saying, “The challenge to responsible leaders of any political party will be to separate the economic discontent from the bigotry and paranoia that are the key to the Trump phenomenon. The question to future Republican leaders is whether they will even try to do so.” I couldn’t disagree more. It is impossible to separate economic discontent from bigotry in a country (like many other developed nations) that was built on the simultaneity of racial oppression, class exploitation, and gender/sex policing.

In the end, we must shift our focus from recovery from Trump’s nativism and bigotry to a dismantling of the institutions, systems, and processes that animate the anger and hatred his campaign relies upon. This means being honest about the investments we have in mass incarceration, the commitments we have to racial separatism in the forms of redlining, predatory lending practices, segregation, gentrification, and the continued avoidance of upsetting well-meaning liberal Whites who struggle to see themselves as active participants in the systems they think originated when Trump announced his candidacy.

I am not interested in recovering from Trump or the ideologies he uses as jet fuel to propel him to 1600 Pennsylvania Avenue. I would rather focus on our full inoculation and eventually, immunity. That will take a lot more courage than minimizing our challenges to defeating Trump.