Did The 2016 VMAs Commodify or Celebrate Blackness? 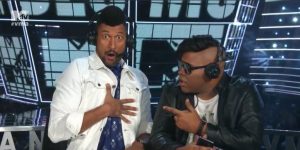 On the surface, the 2016 MTV Video Music Awards put blackness on a pedestal. Still, I can’t help but feel like it was put there only for consumption without proper appreciation.

To be honest, I’d forgotten all about the MTV VMAs until we saw some Twitter chatter about Beyoncé maybe showing up. I’d given up on the ceremony long ago, not interested in watching a show that was clearly targeted at white audiences. But when you hear that Beyoncé might be in-person at any awards show, you tune in. It might not happen again for another decade.

We tuned in just in time, at the very moment she started to perform. And it was epic (as you probably already know). If you somehow missed it, or are like me and still have the original HBO airing of Lemonade on your DVR, you can stream the performance here. One of the things I love most about this “Lemonade Era” is that unfiltered blackness is finding itself in the face of white consumers. Not the blackness that makes them comfortable or the blackness that is easily appropriated, but blackity black blackness. That’s why the rest of the airing was so stunning to me.

RELATED: Beyonce’s New Video For “Formation” Is A Sign The Black Y2K Is Coming

Even though I have my issues with Rihanna, I thought her Video Vanguard award was deserved. I can’t vouch for her 4 performances, but performing that many songs within one night is no easy task. So kudos all around for Ms. Fenty. But in accepting the ultimate honor of the night, she said that the award means so much to an array of minority groups. All groups she listed received rousing cheers. But when she mentioned black women, the applause quieted a bit. The moment was so awkward that I rewound to see if my ears were deceiving me, but they weren’t.

And there’s something incredibly sinister about the masses celebrating a black woman but not black women. It’s small, but actions like these message black women that they aren’t valuable in America and signal everyone else that this thinking is the norm.

It made me think. Is this award show just another instance of buying and selling blackness?

I eventually went back to view the other parts of the show that might be of interest, and came across Kanye West’s speech and video for “FADE”. I don’t know if it was the combination of West, a black man from middle-class Chicago, listing all white men as his role models and Teyana Taylor subsequently epitomizing many of the physical characteristics that have been used to objectify black women (breasts, hips, and ass), but with how many black people were spotlighted that night, I couldn’t shake the feeling that they were being seen as props instead of people.

RELATED: On Black Humanity and the ‘White Gaze’

“Hosted” from a sound booth by Keegan Michael Key and Jordan Peele, this year’s show was literally grounded by black people. But even as they did their best to be funny, the duo staying in character throughout the whole broadcast contributed the feeling that they begin and end as purveyors of entertainment.

This same feeling continued as I watched Nicki Minaj’s perform with Ariana Grande on “Side to Side” and Ty Dolla $ign perform with Nick Jonas. Even in the freeness of our expression, all I could see was blackness being boxed and packaged as a means to entertain white folks.

It reminded me of the slam poem “Hide Your Shea Butter” from Crystal Valentine and Aaliyah Jihad. The “white gaze” is real, and even as Beyoncé so poetically displays how black bodies are being systematically shot down, we have to question if that message is being received or if viewers are content enough to tweet that she slayed and move on to the next.