‘Greenleaf’ And The Next Frontier of American Entertainment 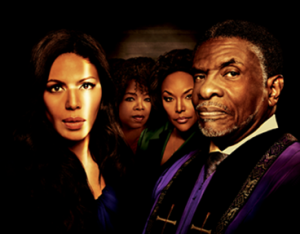 Greenleaf is the most watched new show of the summer. Out of all new shows, on network or cable TV, Greenleaf brought in the highest ratings. And that speaks volumes about the changing tastes of Americans.

If you haven’t heard of Greenleaf, it is a dynamic new show on Oprah’s OWN network. It chronicles the lives of a family at the head of a mega church, from the pressures of leading a congregation to in-fighting amongst family members to the deal making that is required to keep a church afloat. There’s a heavy dose of scandal, a lining of deceit, and disaster lying in wait around every corner. In short, it’s not much different from the bulk of OMG moment shows that populate network TV lineups. But Greenleaf, airing on Oprah’s rising from the ashes network, boasts an all-black cast.

There are many things that one could point to as the reason for Greenleaf‘s success. OWN had a heavy marketing campaign prior to the show’s debut. Oprah herself appears in a recurring role. And summers are known for less formidable competition as many major networks cycle out their first string shows for those that have been riding the bench. But to pin this show’s impressive ratings on any of those things would be to ignore the obvious. Greenleaf was a roaring success because it’s the type of entertainment that many can’t find anywhere else. The high production quality shows in the film quality, clever writing, and top-notch cast performances. And the numbers don’t lie.

Far too often, “diversity” in entertainment is thrown around to pat executives’ backs when a singular non-white, non-male, or non-heterosexual character is added to a show (bonus points for including a character that checks more than one box). But shows like Greenleaf do a stellar job of depicting real life diversity. The black family that leads this mega church doesn’t fit the “down and out” stereotype that tends to befit black characters. They’ve got plenty of money. They have loads of social capital. And they have the agency to pursue their desires. Instead of leaning on common tropes, this show speaks to the issues that rock the human soul, like when the family loses one of its daughters, how pride can lead to your own downfall, the ways fear of failure weigh heavily on the mind, and how regret can exert control over your decision making. These are issues that anyone on earth can relate to, and on Greenleaf, they are deftly explored with depth. They aren’t thrown in your face like the typical soap opera; their effect is maximized through delicate delivery.

Along those lines, the characters are far from two-dimensional. Every moment of the show is unpredictable because no one character is written in a straight line. Mistakes are made. The most pious have the darkest secrets. People don’t always get what they deserve. And most notably, characters don’t always make rational decisions. Common convention would tell you that this sounds like a show that might turn people off, as the American public has been conditioned to adhere to entertainment that follows a predictable line of storytelling. But the magic of Greenleaf is in the very human behaviors of its cast. That is something audiences can more closely identify with.

Of course, none of this would be possible without an outstanding cast. Led by Merle Dandridge as Grace Greenleaf, Keith David as Bishop James Greenleaf, and Lynn Whitfield as Lady Mae Greenleaf, the show shines with performances that range from awe-inspiring to quiet. Each of these leads, and the entire supporting cast behind them, are bold in their portrayals. Whether they face infidelity, marital woes, custody battles, or nationwide scandal, they each have a core authenticity to their characters that is hard to find on most shows.

In short, Greenleaf is a great example of making a true investment in entertainment for the masses. With more high profile shows set to debut this fall, including OWN’s Queen Sugar and Donald Glover’s Atlanta on FX, we are watching the entertainment industry transform before our eyes. People are finally coming to realize that shows and movies with black casts aren’t only seen and enjoyed by black audiences. So don’t be shocked when pundits continue to be amazed by how well the newest additions are received.