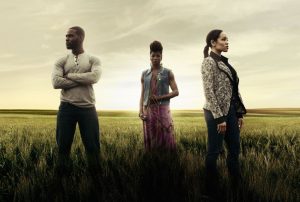 Queen Sugar is an immaculate celebration of blackness, in all its intricacies, customs, and intersections.

Based upon Natalie Baszile’s novel of the same name, Queen Sugar follows the three Bordelon siblings in the wake of their father’s demise: Nova (Rutina Wesley), a world-wise journalist and activist; Charley (Dawn-Lyen Gardner), the savvy wife and manager of an NBA star; and Ralph Angel (Kofi Siriboe), a formerly incarcerated young father in search of redemption. The intersection of these characters already sounds compelling enough, but the show takes on a deeper, more nuanced life as it is contextualized through their unique histories and challenges. Nova is in love with a married man. Charley is ensnared in scandal as it appears her husband is involved in a rape. And Ralph Angel struggles to care for his son Blue as Blue’s mother, a recovering addict, pushes to become a part of their lives again.

Set in Saint Josephine, LA, the show is strikingly beautiful. From long shots of sugar fields to homes filled with the collision of the past and present, the show is an immersive experience, and the setting becomes a character unto itself. This taps into the historical bond between black people and land. And that, though not explicitly stated yet, colors the show’s palette from the background. And on numerous occasions, the shot is lined up just right, framing both a character and the setting, that you can feel ancestry pouring through the screen.

On the surface, Queen Sugar doesn’t sound like much of a deviation from the catalog of shows on television. Like most forms of entertainment, it is built upon taking a core set of characters, putting them in a foreign situation, and forcing them to deal with the conflict that arises. But underneath the hood, there is an array of features that cannot be found anywhere else on television.

It helps that the cast is so pretty. I’m not sure what type of high-def camera the show is shot in, but it is perfectly calibrated to capture black beauty. True to the show’s setting, the cast appears to wear an eternal sheen of perspiration instead of excessive work from a makeup crew. That same sentiment bleeds over into the performances. As beautiful as everything is, the cast tackles difficult issues with emotional gravitas. This isn’t just another black show, or even a soap opera. This is a tour de force drama.

Death, and the myriad of ways that can have a profound impact on the living, is what really animates the character interactions. For Charley, she closes out the first episode walking alone through the sugar cane fields, proclaiming to her deceased father, “I’m sorry Daddy. I’ll fix it.” Ralph Angel, who has charged himself with protecting his son from the world’s darkness, struggles with allowing him to experience losing the grandfather he loved so much. And in the second episode, Nova delivers a masterful sermon on grief, soul food, the importance of black traditions.

But most importantly, it cannot be ignored that all of this is being made possible through the efforts of Black women. Executive produced by Oprah and Ava DuVernay, each episode is directed by a different black woman. Their eyes frame each shot. Their words direct how the actors perform. We see, hear, and experience what they want us to. Queen Sugar is important because it gives these women a platform, more credits to their name, and a grand opportunity. But even more importantly, their stellar work speaks to the unique talents of an entire community, a community that is often undervalued or ignored. Their ability is that much more difficult to ignore when the end results are so compelling.