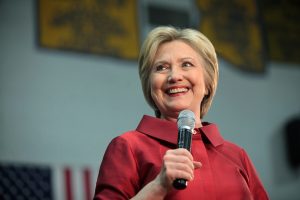 I am reluctantly writing this piece. Both because I am still unsure about my exact sentiments on Hillary Clinton as the preponderant answer to our nation’s lingering political issues and simultaneously dissatisfied with the notion that her candidacy has been reduced to what lies “between Donald Trump and the presidency.” But, I think its time to move beyond that.

To be clear: I know that I am not a fan of Hillary Clinton. Yet, as we get closer and closer to November, I am beginning to care less about my personal feelings toward candidate Clinton and more about the ways this election has reinforced and even normalized sexist, patriarchal dog whistle politics despite Clinton’s overwhelming qualifications for the highest position in the US government. In fact, her qualifications put her ahead of the last three presidents, their opponents, and even their vice presidents. That means something.

It must also be said that one of the biggest mistakes Clinton and her supporters and accolytes ever made was telling us that she was our only hope. I remember so distinctly when Arianna Huffington described Hillary Clinton as “the only one who can stop Trump.” They really believe that. Many of us do not. But, their “all or nothing” approach to this election is one of the reasons so many young people (primarily of color) have become disillusioned and even exasperated with this entire ordeal. I count myself as one of them. I am only turning the corner at this point because I have come to see a particular aspect of this election differently.

Recent polls have shown that waning interest in the election could be a serious threat to Election Day turnout, a fact that may negatively impact Clinton’s returns. With just eight weeks to voting day, Trump remains a viable candidate in the eyes of many, but there is more to this issue than polls can explain. After watching the nuclear fallout following Clinton’s bout of pneumonia last week, it hit me that so much of this election has been focused on personal feelings, innuendo, and other unfounded, unverifiable opinions that we haven’t even had a moment to assess the clear difference in yard sticks used to measure both Trump and Clinton.

The differences in the ways the two candidates have been judged became incredibly clear to me during the recent presidential candidate forum with NBC News. During the discussion – where each candidate was given 30 minutes to address Matt Lauer’s questions – Clinton was badgered about private email servers and other non-presidency related concerns. They even had a question from the audience that belabored the point that email security was kind of important. But, since Clinton isn’t running for President of the Geek Squad, the questions just seemed unnecessary and sensational.

Not only that, Lauer repeatedly interrupted Clinton. The visual was stunningly disappointing.

When Trump’s 30 minutes came, Lauer seemed quiet and introspective, never once interrupting Trump. His questions were gentler and mainly dealt with Trump’s own opinions of his preparedness for the position. Suffice it to say, most viewers were displeased. And even I, as someone who has very vocally defected from the Clinton camp, found myself both sympathizing with the unique struggles Clinton has faced in her journey to the White House (again) and grimacing at how ubiquitous the disrespect of her personhood has become in recent months.

Perhaps it was the backdrop of this “forum” that made last week particularly unbearable. It would be an understatement to say the press (and the Trump campaign) had a field day with Clinton’s health issues. Many were disappointed that she hadn’t disclosed more information about her diagnosis and condition while others supported her need for privacy. Surprisingly though, even as commentators and pundits had a lot to say about Clinton’s health, few likely voters were concerned about it at all.

I couldn’t help but think back to all the times I, as a working mother in corporate America, had to hide a cough, push through morning sickness, or ignore pounding headaches during business meetings all because I knew that if I showed any sign of fatigue or distress, my commitment, preparedness, and aptitude for my role would come under fire. I can’t even imagine what that must feel like for Hillary Clinton.

That’s why I am voting for her in November. It’s not because I suddenly love her. It’s not because I am confident in every one of her policy initiatives. It isn’t even because she is a woman. I am voting for Hillary Clinton in November because she is the most qualified candidate for President of the United States in my lifetime despite the undue focus on her gender, age, and demeanor.

This is what her campaign should have focused on from the beginning. Rather than trying to convince us all that this was just about beating Trump, they should have explained that her resume is the no-contest option to his. Rather than asking us to support her because she is a woman, they should have honed in on the fact that her qualifications have been overshadowed by our patriarchal, misogynistic culture that requires that women perform better, longer, and harder than men even when we have already surpassed the expectations of us.

There are a lot of issues with candidate Clinton and I am sure there will be many should she become President Clinton. However, never in our history have we expected a president to be perfect. It’s time we asked ourselves why we are doing it now.