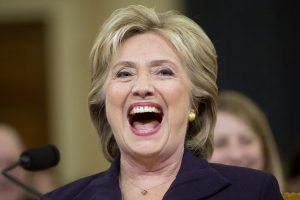 At the first Presidential Debate, Sec. Hillary Clinton was on fire. She came armed and ready with reads, and she let them loose without prejudice.

The story of the night was how prepared Clinton was for this first debate. She had her facts memorized. She looked rested and alert. She stood poised and unflappable against a barrage attacks from Trump. But for me, Clinton really won the night because her clapbacks were flawless.

10. “I have a feeling that by the end of this evening I’ll be blamed for everything that’s ever happened.”

Trump asserted that Clinton is part of the reason that companies can’t bring jobs back to the United States.

9. “Well, Donald, I know you live in your own reality, but that is not the facts.”

Trump pushed that Clinton changed her position on the Trans-Pacific Partnership after she heard his opinion on it, like she was copying off his paper at school.

8. “In fact, I’ve written a book about it. It’s called, “Stronger Together.” You can pick it up tomorrow at a bookstore or an airport near you.”

Trump insisted that Clinton had no economic plan.

7. “If you have paid zero, that means zero for troops, zero for vets, zero for schools or health. And I think probably he is not all that enthusiastic about having the rest of our country see what the real reasons are because it must be something really important, even terrible, that he is trying to hide.”

Trump’s positions on his tax returns were dubious at best. And after Clinton claimed he paid zero in income tax, he responded by saying “That makes me smart.” This was red meat for the poised and prepared Clinton, and she went for a TKO.

6. “We have an architect in the audience who designed one of your clubhouses at one of your golf courses. It’s a beautiful facility. It immediately was put to use. And you wouldn’t pay what the man needed to be paid when he was charging you.”

One of Trump’s most consistent selling points has been that his is a strong businessman. Clinton turned this “strength” into a weakness by pointing out how his success has been on the backs of other people. But she didn’t stop there. I always enjoy when politicians get petty. It’s just good entertainment. But Clinton upped her petty quotient in bringing an actual architect that Trump shorted along with her to the debate.

5. “I think Donald just criticized me for preparing for this debate. And yes I did. And you know what else I prepared for? I prepared to be president, and I think that’s a good thing.”

Honestly, the longer the debate went on, the more wild and foolish Trump became. He was so intent on bragging about the campaigning he had been doing in Detroit and Philadelphia. that he left himself wide open for this canned yet severely effective mic drop.

One of Clinton’s most effective weapons against Trump during this election cycle has been his own words. After he rambled on about President Obama’s birth certificate, blaming Clinton for the “birther” issue and claiming “I think that I developed very, very good relationships over the last little while with the African-American community”, Clinton didn’t even need to say much.

Temperament has become somewhat of a major issue in this year’s election, mostly because Clinton is a viable woman candidate. And Trump dug himself a deep hole on this issue after double-downing on his statement that Clinton “doesn’t have the look.” He then proceeded to speak incoherently and raise his voice at Clinton. And so after he proclaimed to have a “winning temperament”, a patronizing “okay” was more than enough to disprove his claims.

2. “So a man who can be provoked by a tweet shouldn’t have his fingers anywhere near the nuclear codes as far as I think anyone with any sense about this should be concerned.” … “It’s a good one though. It well describes the problems.”

Hillary has been pounding Trump for months over his social media antics. And for the debate, she pulled up one of her more successful one liners from the past: “”. Trump fired back, saying the line was “getting a little bit old,” but Hillary’s immediate clapback sent him reeling.

1. “As soon as he travels to one hundred and twelve countries and negotiates a peace deal, a cease-fire, a release of dissidents, and opening of new opportunities and nations around the world or even spends 11 hours testifying in front of a congressional committee, he can talk to me about stamina.”

Trump had to have known that she’d be more than prepared to match wits with him over questions of her stamina. And he walked right into the shitstorm when he said “I don’t believe that Hillary has the stamina.” In what had to be a thoroughly rehearsed response, Clinton blazed through the high points of her political career. All at once she completely demolished his credibility and made an impressive case for how strong of a president she may be.