Let’s Not Forget, Solange Has Been Blackity Black Since Way Back 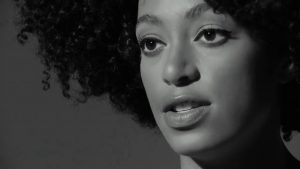 A Seat At The Table is more than a trite or superficial call out to blackness. The album is a real and genuine expression that represents a more fully realized Solange, one who has been incubating since at least 2003.

Just as Solange released her album A Seat At The Table, folks gravitated to its black-positive messaging. From the outside looking in, it’s easy to dismiss her as a privileged upstart that has profited off of her family’s success. Solange has been afforded many opportunities that most are not lucky enough to have access to. She appears to be very well off financially. Her wedding photos looked like practice stills for Beyoncé’s Lemonade visuals. But, this album proves that Solange has come to define her authentic self, independent of economic or social circumstance.

Growing up a few years behind Beyoncé, Solange has walked a tough road in making a name for herself separate from her superstar sister.

At times she was disregarded as a cheap knockoff of the better model and at other times, she was painted as a rebellious upstart and nothing more. But if you really take a look at her career, starting with her debut album Solo Star in 2002, Solange is a woman who has been wrestling with black feminism from the start. On that album, her content was very contemporary and pop-centric, but if you look at the styling on both the album cover and from her videos, all you see are hues of red, black, and green.

On her Sol-Angel and the Hadley Street Dreams album, she was the epitome of a carefree black girl before that really became a term, fully integrating historical images and themes of the revolution in her video for “I Decided”. On her True EP, you can hear the beginnings of the sounds Solange feels at home with on A Seat At The Table, and her South African set video for “Losing You” was a true homage to black joy in the face of struggle.

In just this quick write-up alone, it’s clear how blackness has always been central to Solange’s career trajectory (and I haven’t even touched on her Twitter account). And as she has grown and matured, so has her conception of blackness and her ability to best express that conception in her work. And those who might have mischaracterized her as nothing more than a two-dimensional figure who was easy for us to define and digest before, no longer have a leg to stand on. Solange is very pro-black and, at the same time, she is out to defy the anti-black messages and structures of the music industry.

Is Solange using the movement as a means of making money? Is she really about what she is singing on her new album? I can’t answer those questions. But I do know that we are all imperfect people, and even imperfect people get it right sometimes. The most important thing for us all to do here is to focus on edifying the work without anointing any one individual as the prototype. While we can look critically upon any work which has been heralded as a benchmark for our communities, we should also be careful to give credit where credit is due.

Protest takes many forms. We must protest anti-blackness on all fronts and across all mediums. Things always get complicated when commercialism gets involved, and the fact that A Seat At The Table debuted at #1 on the Billboard charts is bound to incite some folks to label this album as commodification of the movement. But I, for one, am here for it. Solange has definitely earned her seat at the table.