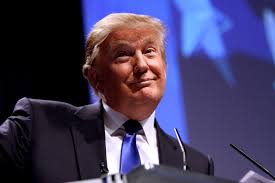 Donald Trump ain’t sh*t. He ain’t never been sh*t. And he never will be sh*t.

Most of us already knew that so his recent leaked video (where explains that “when you’re a star [women] let you do anything” including “grabbing them by the pussy“) wasn’t a total shocker.

Not only that, his ominous stalker behavior at the second presidential debate, his frequent interjections of the moderators, and even him calling Hillary Clinton the “devil” weren’t new. In fact, it was lowkey expected that he would rely on bombastic behavior, intimidation, and child-like disruptions to establish his hyper-masculinity and overbearing presence on such a grand stage.

So, with this evening’s debate getting closer and closer, no one should have any remaining surprise stored up for him. None.

Frankly, I have questions for those out there for whom Trump’s words – and the droves of women who have now come out to share their experiences of sexual assault and harassment at the hands (no pun intended) of the Republican candidate – come as a surprise. I have to wonder how they still experience exasperation, confusion, and an overall lack of foreknowledge about a presidential candidate whose word-vomit rap sheet is longer than his tax returns. There are plenty of words and deeds that suggest he is the literal scum of the earth.

There was that time when he was slowly and systematically bankrupting his Atlantic City casinos (while still making tons of money for himself) and stealing money from his own employees’ retirement accounts. Then there was a conversation where Trump suggested that he would have an intimate relationship with his own daughter – referring to her as a “piece” on syndicated radio. Then, there was that whole debacle where he created a for-profit “university” that actually screwed participants out of their money, using his celebrity status to exploit the same people he expects to vote for him in November.

The fact is: This man has made it clear that he sees no bounds on his ruthless, money-grabbing, self-interested behaviors. Why hasn’t everyone else figured that out yet?

While I hate the types of exceptionalist language people often use about Trump, I do believe he represents the worst of America. The sad thing is: the worst of America isn’t really a minority. He isn’t a special snowflake. He is just what white supremacy looks like in Versace, orange tanning solution, and frothy hair.

We want so badly to imagine ourselves as inherently good, pure, and righteous that we can’t even comprehend the pure evil that is Donald Trump. Because we want to assume goodness in others (or at least believe it is humanly possible) we can’t even see how a person like Trump can exist. But, he does exist. And he likely has friends.

Trump embodies the capacity of white supremacy when coupled with unbridled autonomy and long-standing capitalistic commitments. However, he does not represent some astounding change in politics in the United States. Rather, he is what happens when our worst is emboldened to come into the light, to slink out from behind computer screens and closed chat rooms to the forefront of our electoral system.

Thus, what has to change here is our perception. In essence, we have to stop taking the “wait and see” approach with Trump’s vitriolic hatred. We have waited and seen enough to treat Trump as the subhuman he is.

Let’s stop giving him airtime just to express shock and awe that he abused the airtime. Let’s not belabor his counterfactual nonsense by obsessing over fact-checking websites. Let’s stop getting riled up over the political equivalent of Scooby Doo’s Red Herring. He’s not worth it.

Instead, we should use this time to critically engage with the fact that someone like Trump feels safe and secure enough to publicly harangue people who do not look like him. Let’s converse about the ways that Trump’s campaign highlights our ongoing denial that we still face issues of racism, ableism, fat shaming, slut shaming, rape culture, misogyny, transphobia, and the like. Let’s investigate how this man is still able to command audiences on the right, those that are still very willing to usher him into the White House come January.

But, let’s stop with the surprised schtick. Beyond the fact that it has gotten old, it limits our own imaginations about how we can actually make the United States into the place that so many (incorrectly) already believe it to be.