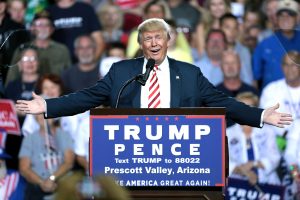 Trump is White America’s Barack Obama. He is their hope. But in reality, he is a complete wild card. And speculating on what a businessman with no morals and zero political experience will do is a game we’re all bound to lose.

But as the world grapples to come to grips with what the new normal will look like in America, it’s only natural to question what the precise details of the Trump Administration will be. I assume that both sides of the political spectrum expect things to look the same, only one side sees it as a paradise and the other sees it as an endless nightmare. But after an election cycle that feels like it has broken every political convention, who are we to believe that we have any clue what America will look like in 2017? or 2020?

Yes, Trump has said a lot of things. He has promised a lot, and like outgoing President Obama, he galvanized people across the country to believe in his message. But one of the biggest differences between these two charismatic candidates is that Obama offered tactile plans and Trump has only given lip service. In fact, his positions have continued to shift throughout his campaign.

Aside from my own inner turmoil over this election result, what has struck me most in the wake of 11/9 is the change in Trump’s demeanor. What was once all bravado has now transformed into a stock seriousness. Now he wants to be a unifier. And while I have tried my damnedest to avoid political coverage, when I look in his eyes I see fear.

I don’t think he meant 90% of what he said on the campaign trail, and faced with the prospect of actually having to lead the country, his orange face has gone pale white. He is in a completely different arena than he has ever been in, and I think the realities of that have shaken him to his core.

So if he didn’t plan on following through on his promises and we can’t trust what he has been trumpeting for so long, what can we be sure of? The one constant about Trump throughout his entire life is that he is a businessman. He’ll run America like a business, looking to cut costs (i.e. social benefits and bureaucracy) and maximize profits (likely by reducing taxes on the rich and increasing them on the poor). And we won’t have any clue as to how that will work out until some hard plans are put on the table.

Yes, there are a plethora of very important issues that President-elect Trump may put into jeopardy. Same-sex marriage, immigration and deportations, abortion, Obamacare, and law enforcement are just a few. But until someone puts forth a solid plan or takes actual action, all that the speculation does is feed into our personal and collective anxiety.

What we should be more focused on is educating ourselves on the issues, preparing our defenses, and organizing for the change we are still very capable of achieving.