Safety Pins, Pumpkin Spice, and the Novelty of Political Statements 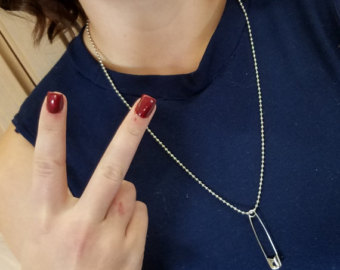 If someone had told me that the 2016 election would have resulted in political discussions of coffee flavorings and clothes pins, I would have told them they were lying. Yet, here we are. And it actually kinda makes sense.

Immediately following the election of Donald J. Trump to the presidency by large swaths of mostly rural and southern White Americans, in a surge of “allyship” artifice on the Internet, the “safety pin” idea was born. It is a passive gesture Huffington Post called “incredible” that is meant to show marginalized groups that those individuals wearing safety pins on their clothing are anti-racism, anti-xenophobia, anti-homophobia, and so on. Around the same time, I saw a clever meme on social media that suggested that sprinkling a little bit of pumpkin spice on racism might attract white women’s attention to it as a salient issue. Other comments suggested that avocados were the way to go or maybe yoga pants.

I will admit that I chuckled when I read about the “political “development of safety pin wearing and the satirical criticism of White women’s lack of excitement around issues that they don’t believe personally affect them.

I laughed at the pumpkin spice and avocado references namely because “pumpkin spice racism” and “racism with a side of guac” both sounded ridiculous and completely plausible at the same time. But, what’s more important, I laughed because it was true. I knew that the passion I had already seen from White women to protect their cherished seasonal orange everythingness was far greater than anything I had seen from them when people of color were systematically and structurally oppressed before their very eyes.

Similarly, I knew that those poor, White Guilt laden, bleeding heart White women were probably also behind the idea that wearing tiny pins on necklaces and t-shirts would actually be a signal to those people targeted by Trump’s hateful rhetoric that they were the “good guys.” This was an act they found more comfortable, more digestible than actually doing something (like not voting for a Neo-Nazi, or not supporting harmful legislation, or not calling Michelle Obama racist names on the Internet therefore confirming their adherence to narrow, European beauty standards, or not doing…a bunch of other stuff they do all the time that actually harms marginalized people).

In both instances, we are reminded that much of White women’s feminism, activism, and passion for civic responsibility rests on its fashion and showiness. It’s the idea that if it isn’t trending, it probably isn’t that important. If it doesn’t cost $210 on Etsy and isn’t bejeweled with Swarovsky crystals, it won’t convey to others that it’s about something, something bigger. Sadly, these consumer commitments translate to ideological ones. Narcissistic self-aggrandizement even applies to White women’s politics.

The problem isn’t wearing the safety pin , though. That’s akin to putting an American flag in the yard each July fourth. You’re probably patriotic year-round and the flag just lets strangers know too. The real problem is when someone – likely someone in need of your assistance or protection – expects you to actually do something. If all the pin was really about was performance and looking “with it” or “socially aware”, how does one respond when some racist, sexist, transphobic, xeonophobic, ableist shit is going down?

Perhaps the best explication I have seen comes from Reductress,

“Why didn’t anybody tell me I would maybe have to do something?

When the woman who was still being yelled at murmured “please” while looking directly at me, I was wondering why she picked me out of the crowd. Then I realized, “Oh my god, the safety pin.” How did she even see it when it was so small, so obscured by the handles of my NPR tote? So I screwed up my courage and said “come on, guys” very quietly to the men. They called me a bitch, but they stood up and got off at the next stop. Talk about tense! I had no idea that something like this could happen to me.

And when I finally got to work, lo and behold, my boss said, “Why are you wearing that pin?” and asked me if I supported “…all that Black Lives Matter bullshit.” How was I supposed to know that this tiny marker for social justice would require me to have a conversation about social justice? Just ask any of my friends: I hate confrontation! Since I was feeling really tired that day and just didn’t want to deal, I threw my gem-encrusted symbol of safety in my desk drawer to save for another day when I was feeling more up to it…”

Inherent to this problem is that issue of self-selection. Many people prefer to participate in situations that rely on self-selection because they don’t want to be forced to do anything against their will (or, in this case, be expected to be good people who look out for those who are systematically dis-privileged). Instead, they would rather perform “nice” and “good” and “socially conscious” so as not to look bad in front of judgemental others.

Ironically, these phenomena are examples of the ways that racism is inherently wrapped up in capitalism and commodity culture. In many ways, they are the embodiments of racism in and of themselves.

Most people who have read a little bit of Angela Davis’s or bell hooks’s or Patricia Hill Collin’s or Joy James’s Black feminist writing know that racism, sexism, and classism are perpetuated and performed through a lens of capital exploitation, symbols, and other forms of performance that only reinforce racial oppression. What is more representative of that process than an everyday item that has been elevated to a totem of “allyship” just because White people said so?

To see these safety pins or their converse, the lack of real excitement around and commitment to the preservation of political and civil rights for all people (unless it comes with some pumpkin flavor), as anything but a dangerous, haphazard performance of political zeitgeist is surely a mistake. And, it could come with major consequences.