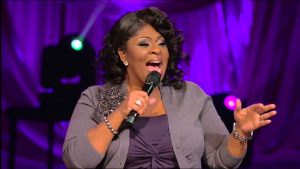 I have been watching the nuclear fallout following gospel singer Pastor Kim Burrell’s viral video posted last Friday for almost a week. I have seen responses from others in the LGBTQIA+ community and its supporters, Christians and atheists, and virtually everyone else who has an opinion on the matter. I think it’s time we have an honest and frank conversation about Houston-based gospel singer Pastor Kim Burrell, the Black Church, and our socialization with homoantagonistic/anti-queer, heteropatriarchal language from the pulpit.

I won’t go into the gory details of the video in question but some of the highlights include Burrell referring to LGBTQIA+ people – or “the gays” – as “perverted.” She says, “Anyone filled with the homosexual spirit, beg God to free you… That perverted homosexual spirit, and the spirit of delusion and confusion, it has deceived many men and women.”

Then she leapt into full homoeroticism stating, “You as a man, you open your mouth and take a man’s penis in your face, you are perverted. You are a woman and will shake your face in another woman’s breast, you are perverted. And it has come into our church and embarrassed the kingdom of God.” Also, in the video, she explains that homosexuals will die in 2017 while the audience erupts in cheers and applause.

In a follow-up video Burrell posted to Facebook Live, she tried to explain that she loves “the gays” and those struggling with a “homosexual spirit.” She also denied saying that LGBTQ folx were going to hell in 2017 and said that people “want to be mad” at her.

I stand wholeheartedly with those who have rebuked Burrell and her homophobic comments including Janelle Monáe, Pharrell (though he too is problematic af), Ellen Degeneres and the Texas Southern University’s radio network who recently canceled Burrell’s show “Bridging the Gap”.

Yet, part of me still wonders when we will begin moving the conversation from Kim Burrell and towards deeper scrutiny of the institution she represents. No, I don’t mean Love & Liberty Fellowship Church where Burrell is the pastor. I mean the Black Church (not a monolith of course but termed so here to denote the traditional, white heteropatriarchal arm of the Black Christian faith), a place I have repeatedly written about precisely because of the regularity of these sorts of narratives and their alienation of not only LGBTQ folks but also unmarried and non-traditionally feminine Black women. These folx fall outside of the heteronormative, gender binary-reliant culture that so many Black Christians cleave to which often makes the Church – a place meant to provide respite from the world – a very violent place for anyone who doesn’t look, act, dress, behave, and love righteously enough.

For the record, here’s my take on same-sex love and marriage. And, here is a catalogue of just a few of my experiences trying to find a Black Church after leaving California. These experiences are rooted in the fact that the church continues to be a harmful and violent place for anyone who does not aspire to heterosexuality, sexual conservativism, traditional notions of gender roles and identity, and white capitalistic notions of labor and work. These are normalized positions of the Black Church. So what exactly would we expect someone like Kim Burrell to say about her faith?

Some basic judgments can be made about Burrell’s comments and reaction. First, she is clearly using bigoted notions and self-righteousness to guide her understanding of Christianity and her flock. Second, she is also clearly a narcissist since she seems incapable of addressing how her words are harmful to LGBTQIA+ people without condescension and self-distancing. Lastly, she is literally parroting the same drivel most of us young Black folx witnessed every pastor, visiting speaker, deacon, or Sunday school teacher say while growing up in the Black Church.

Pastor Kim Burrell is not an anomaly. She is a fixture in the Black Church that holds on tightly to the “old ways,” the practice of ceremonious traditions that perform church rather than live it. Can we talk about that?

Like I said, I am all for chastising Burrell for her words, but there was an audience of people cheering her on that day. People like Pastor Shirley Caesar are in agreement with her. There must be others attached to the Black Church who feel the same way but haven’t been caught on candid camera or made into a viral poster child for hate and bigotry.

All of this conversation reminded me of the many articles I have read about young people leaving Black churches. Some young Black people have resorted to “church-hopping” because they do not see their daily struggles with social justice reflected in their congregation and teachings. Others, especially in cities like Oakland where I grew up, are moving away, losing connections with long-standing church families and experiencing waning interest with the subject matter. There can be no doubt that the heteronormative, “do (_____) and you’re going to hell!” theology espoused by people like Burrell is contributing to this abandonment of the Black Church.

Embedded in this conversation is the issue of tithes, the life blood of most of these Black churches. Older people are often in better economic positions and can afford to give their 10% or more each week to the Building Fund or the Pastor’s Love Offering. But, young people typically have more difficulty doing so. If that is a motivator for these Black churches ousting young people, then they are working backward.

We young Black people, queer or otherwise, just aren’t going to church anymore. In particular, we aren’t going to Black Church anymore. Like so many other institutions in this country, folx like to erect the building fully-equipped with services and objectives without addressing the needs of those these institutions are supposed to serve. I don’t trust the Church to do this but maybe it is time to rethink what churching is really supposed to be. If it is about keeping the Black Church “righteous” then the institution will be dead and gone soon enough. But, if it is truly about God’s unconditional love, then we are clearly doing it wrong.

I hope we (and by “we” I mean Black Christians and those who might be considered Christian-adjacent) start to have a conversation about the lessons from the Black Church that we had to unlearn in adulthood. I hope we begin to examine how the traditions of the Black Church have made it harder for us to be our total selves and still believe God truly loves us. I hope we start talking about how the Church can once again be a full participant in Black Liberation. I sincerely hope this conversation gets there.

These should be our new traditions.