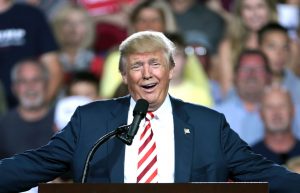 There was that time when Dr. Henry Louis Gates was arrested in his own home and demanded an apology for it only to have the Cambridge Police Department demand one from President Obama instead. Just this week, TV host and newly appointed Czar of the Blacks Steve Harvey was required to apologize to “the Asian community” for discriminatory and sexist remarks he made about Asian men (that he probably still believes). And, now, folx want Donald J. Trump (a man I will never call POTUS) to apologize to one of the most iconic civil rights leaders of the past three generations, Representative John Lewis, for calling Lewis “all talk…no action” in one of his infamous Twitter rants.

If only Donald Trump’s apology actually meant something though…

Here’s the thing: Donald J. Trump is ‘gon Donald J. Trump everyday, all day. He has done it for the past seventy and a half years. I expect him to do it until the day he dies (not like I’m looking forward to it or anything. I’m just saying. Sort of). Trump was elected to the highest office in this country precisely because he hates everyone who isn’t him or Ivanka Trump. Moreover, he probably has no clue what Rep. Lewis has ever done for his country. So, based on those facts alone, an apology would be guaranteed to be as empty as his Viagra bottle.

In the United States, and probably in most places across the world, folx rely on the public shaming and humiliation tactics wrapped up in asking for, sometimes receiving, and repeatedly discussing public apologies to wipe clean a number of egregious sins. The performances of said apologies rarely require any sort of education or mitigation or mediation or anything that *actually* helps trash ass ain’t-shitted people like Donald J. Trump figure out how not to be the Cheeto embodiment of the Ghost of Presidents Future. Instead, they rely on “white people only tactics” like “feeling bad,” and “promising not to do it again” to appease folx who are watching.

I’m frankly tired of it.

*We* know who Rep. John Lewis is. We know that he grew up in the Jim Crow South pre-Brown v Board of Education. We know that he has been organizing formal resistance against the institutionalized racism on which this country thrives since before most of us were a glimmer in our parents’ eyes. We know that he was the keynote speaker of the March on Washington (like the original one) in 1963 when he was only 23 years old, an opportunity that he got only because of his steadfast and committed work with the Student Nonviolent Coordinating Committee (SNCC) and Dr. Martin Luther King, Jr. himself. We know that he nearly died from a white militia and state trooper beating-induced skull fracture on March 7th, 1965, a day that is now known as “Bloody Sunday,” when he and Hosea Williams led protesters on a march from Selma to Montgomery, Alabama.

We know that since that day, Representative John Lewis has done more to ensure a more just and equitable United States than Donald J. Trump has done over the span of his entire inhabitation of the soulless body he occupies.

We don’t need Donald J. Trump to apologize to Representative Lewis. No one needs that trash.

Let’s start asking for what we really need: for Trump to disappear himself.