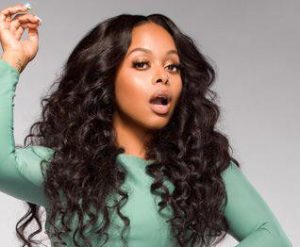 The internet was in an uproar when it was leaked that first Jennifer Holliday and then Chrisette Michele would be singing at one of Donald Trump’s inauguration celebrations This wasn’t just because they were the latest on a list of Black celebrities being associated with Donald Trump. Chrisette Michele and Jennifer Holliday were supposed to be ours. But while we have been holding them and their music close to our hearts, their recent actions show that our loyalty is not being returned.

I have been a longtime fan of Chrisette Michele. Back in 2007 when she was featured on “Can’t Forget About You” by Nas, I felt like the next great voice of R&B had been discovered. Her sound was instantly both vintage and a breath of fresh air for the genre. And with her neo-soul vibe and tendency to infuse elements of hip-hop into her work, I always assumed that her political leanings would be more liberal. That’s why news that she would be performing at then President-Elect Donald J. Trump’s inauguration ball was especially disappointing.

Only making the situation worse, Michele didn’t back down or bow to her fans’ criticism of her actions. Instead, she put out a racial kum ba yah statement through social media that cast her as humanity’s “bridge” for the nation, a “voice for the voiceless,” and a martyr for the salvage of the human race. It’s like she offered herself for tribute in a Hunger Games battle where no one else was playing.

She positioned herself as the Black representative, but none of us asked her to represent us this way. This is not the representation that anyone wants.

Aside from pulling straight from the “doing too much playbook” with her melodramatic positioning, Michele publicly sided with a racist, misogynistic, hateful, “insert evil descriptor here” bigot who now holds the most powerful position in the world. His months of stepping on and over the millions of marginalized people in this country is reason enough for any well-respecting Black artist to avoid him. Instead, Michele seems to have chosen a paycheck over those predominantly Black people who have largely buoyed her through her career, using her self-ascribed martyrdom as cover.

And I’m feeling some kinda way.

It’s the same way I felt when news was leaked that Jennifer Holliday was a planned performer at one of Trump inaugural celebrations. When she backed out, I thought that she had a wakeup call and realized the error in her ways, but her reasoning for why was even more troublesome.
During an interview on A.M. Joy with MSNBC’s Joy Reid, Holliday made it abundantly clear that she only declined Trump’s invitation due to feedback she received from her LGBT fans and not from comments she received from Black critics. Holliday went on to cast Black people as hate-filled detractors who only called her names instead of speaking to the issues themselves.

Holliday’s response is problematic in a multitude of ways. To start, she is completely uneducated on the issues and the current political climate. Just like any other American, she should not be relying on tweets to get up to speed on the incoming president’s agenda or how that agenda might affect millions of marginalized people. More noticeably, she manages to stereotype an entire race of people (a race which she herself is a member of) on a show led by a person of that same race. And she does so without pause. Furthermore, her actions (or lack thereof) illustrate that Holliday is lacking in the solidarity department when it comes to both Black folk and women, and her only clear allegiance is to her LGBT fans who she claims “fed her even when the church people” didn’t.

But to us, Jennifer Holliday was one of ours. Always has been. Her fame was built upon a starring role in Dreamgirls. She made “And I Am Telling You” the seminal hit that it is today. Jennifer Holliday has been a fixture of Black culture for decades, so for her to not stand with us in a time when we feel attacked on so many fronts is especially hurtful.

When individuals like Holliday seemingly turn on us, we take it personally because we are personally connected to their work. Still, our investment isn’t enough to instill values of loyalty, modesty, or even decency in them. And that investment has gone unrequited for far too long.

For better or worse, these artists are more than their art. We cannot separate the artist from the art, and at its worst, this means the less savory aspects of their lives bleed over onto the parts we like. This could never take away the amazing work that Chrisette Michele and Jennifer Holliday have accomplished, but their actions can come to overshadow their importance in our lives. The only question that remains is whether the art is valuable enough to ignore the bad or if it just isn’t palatable anymore. And for me, I can’t enjoy Chrisette Michele or Jennifer Holliday after seeing who they are as people.