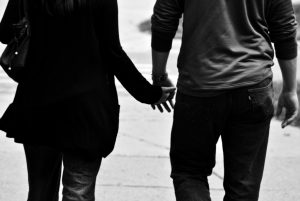 Growing up, one of the most consistent messages I got about women, specifically Black women, was that we were golddiggers. Concerns about women “always wanting something from a man,” and “gettin’ a n*gga in his wallet” were commonplace. Funnily though, these were the same men who said that they “only wanted to hit that” in describing their motivations for dating in the first place.

These experiences weren’t isolated events. I know scores of heterosexual women whose interactions with men were colored by their own attempts not to seem like money-hungry thirst monsters while simultaneously fending off regular (unwanted) sexual advances from the same men. Men who were clearly unavailable for more than money or sex were the same ones concerned that they were only being used for…wait for it…money or sex. And vice versa because guilt lies with all genders here.

These types of surface, non-committed relationships are how emotionally unavailable people remain in close proximity to other humans without ever having to extend themselves beyond what makes them most comfortable.

I’m sure you’re thinking of someone who fits this description right now.

And it’s not like this issue of emotional unavailability doesn’t run in the background of our lives in so many other ways. I distinctly remember ex-rapper now minister Mase on Brandy’s “Sitting on Top of the World” track saying, “I be wit Puff, the girls be like ‘who’s your friend.’ If I hit a chick once she prolly move me in…I used to love the lady till I learned her logic. She only mess wit Mase so the money ain’t no object.” The juxtaposition of sex and money are the literal boundaries of how this fabled relationship is set up. Mase says nothing about actually caring about the “chick” or the “lady” but has oodles of thoughts about her motives for approaching him.

I have to ask though: If all you have to offer another person are sex and/or money, how you ‘gon be mad when that’s all they want from you?

Don’t get me wrong: I have no issues with the tranference of sex and money. In fact, I wish more people would stick to exchanging those material goods rather than attempting to have meaningful relationships when they clearly aren’t equipped to do so. But, my larger point here is that anyone who withholds emotional availability – whether it be because they want sex or money or both from someone else – is in no place to complain when they aren’t approached or desired for anything deeper.

This logic extends to nonromatic situations too. If we’re friends and you only check-in on me when you have something you need/want/care about, you can’t get upset when I really don’t want you for anything else. Or, if folx only make time to party and drink with you but can’t locate your number when you’ve got legit adulting crises to work through, they really aren’t worth investing time in longterm. This is at least a signal that its time to change your expectations of them, right?

Emotionally unavailable people are who they are. And trying to build a relationship with them is like planting seeds in barren soil, nothing is going to grow there. But, if they want to take you out, go. If they want to break your back, oblige. Just don’t expect anything deeper. It will only set you up for failure.