Trump just gave the longest Black History Month speech with no knowledge of Black people or our history. 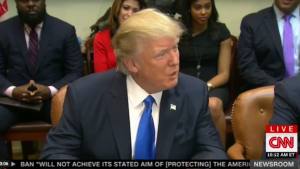 Today is February 1. Donald J. Trump took office 12 days ago. During that time, he has done everything in his power to exclude marginalized people, undermine civil rights, and demolish any standing the United States had abroad with allies and enemies alike. And then, today, he took time to have a “listening session” for Black History Month where, for roughly five minutes, he strung words together about random Black people someone told him did something in this country at some point in the past. He also used the opportunity to attack people who have criticized him.

This shit is astounding.

“Frederick Douglass is an example of somebody who’s done an amazing job and is being recognized more and more, I noticed.”

“Darrell—I met Darrell when he was defending me on television. And the people that were on the other side of the argument didn’t have a chance, right? And Paris has done an amazing job in a very hostile CNN community. He’s all by himself. You’ll have seven people, and Paris. And I’ll take Paris over the seven. But I don’t watch CNN, so I don’t get to see you as much as I used to. I don’t like watching fake news. But Fox has treated me very nice. Wherever Fox is, thank you.”

“We’re gonna need better schools and we need them soon. We need more jobs, we need better wages, a lot better wages. We’re gonna work very hard on the inner city. Ben is gonna be doing that, big league. That’s one of the big things that you’re gonna be looking at. We need safer communities and we’re going to do that with law enforcement.”

On his support from African American voters:

“I’m ready to do my part, and I will say this: We’re gonna work together. This is a great group, this is a group that’s been so special to me. You really helped me a lot. If you remember I wasn’t going to do well with the African-American community, and after they heard me speaking and talking about the inner city and lots of other things, we ended up getting—and I won’t go into details—but we ended up getting substantially more than other candidates who had run in the past years. And now we’re gonna take that to new levels.”

What is probably the most disappointing aspect of this embarrassing spectacle is the fact that Trump surrounded himself with Black people during these comments (by the way: it’s not missed on me that most of them were men who were teachers, veterans, and religious leaders). Trump took this opportunity to, once again, call out Chicago as if it is the only city in the country where Black people live. Rather than question this framing, the folx at the table agreed with him, saying that “gang members” were calling Trump’s supporters because they were planning to “lower their body counts” so that Trump would give them community resources.

That so many Black folx continue to placate this tyrant is disgusting. But, that these are also leaders in religious and educational institutions across this country is disturbing on a visceral level.

Sitting in a room with this man, patting him on the back, indulging his rootedness in white supremacy and white nationalism is blatant and willful participation in our demise. And using Black History Month to do it is probably one of the most disrespectful things they could ever possibly do.

Watch the speech below:

You can see the comments from the Black folx Trump used to legitimize himself in this video.