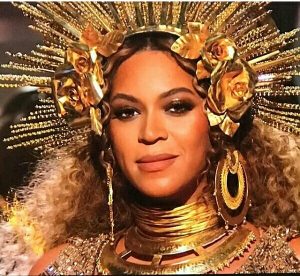 Adele may have opened the show, performed a tribute to George Michael, and won the top 3 awards, but the Beyoncé and her family were the true owners of the 2017 Grammys.

We know that Beyoncé rules everything. And despite losing top honors at the 59th Grammy Awards on Sunday, the awards show was all about her, Blue Ivy, Jay Z, Mama Tina, Solange, and Bey’s gorgeous pregnant body. Here are 6 reasons the 2017 Grammys were all about Queen Bey:

Beyoncé went into the night with an astounding 9 nominations, ranging in genre from R&B to Rock to Country. Oh wait, scratch Country. More on that later.

But in any case, Beyoncé could have walked out of the Grammy ceremony empty-handed. Her point was made and her unparalleled brilliance was spelled out plainly in those nominations.

True, Beyoncé did not take home any of the “top” category wins for the night (more on that later too), but she did go home 2 Grammys richer with wins for Best Music Video and Best Urban Contemporary Album.

Beyoncé has now won 22 Grammys, ranked as the #2 winningest female artist of all time (behind Alison Krauss), and has racked up the most Grammy nominations of any female artist with 62. She is also tied with Adele for most Grammy wins in one night with 6.

In a night that featured tributes to Prince and George Michael, multiple appearances by Adele and Bruno Mars, and a Chance The Rapper team up with Kirk Franklin and Tamela Mann, Beyoncé’s awe-inspiring performance of “Love Drought” and “Sandcastles” was the high point of the night.

From an unabashed celebration of her pregnancy to her golden goddess attire to the dancers bowing at her feet, Queen Bey stayed true to her name. And that chair lean had us all holding our breath, both out of fear and in sheer astonishment. Still, with all of that going on, Beyoncé delivered a vocal masterclass free of charge for all those in attendance and watching around the world.

Outside of Beyoncé herself, Bey’s family was basically the focus of the night. Solange took home a Grammy and got some air time introducing a performance Blue Ivy had folks talking over her pink Gucci suit. Was it a tribute to Prince? Probably, which makes it that much doper. It was fly and fashion forward and your favorite Kindergartner could never. Jay-Z was teary eyed and snotty-nosed after watching Beyoncé’s performance. She even had her mama take the stage to introduce that gloriousness with her own heartfelt words.
When the Knowles-Carter clan has a family reunion, they can’t rent out a hall or reserve a section at the park like most of us. They make arrangements to be at the Grammys, slaying red carpets, taking home coveted awards, leaving the stage on fire.

5. Adele Honoring Her During Her Acceptance Speeches

Disappointingly, Adele took all 3 top category wins for the night (Song, Record, and Album of the Year). But before she could even launch into her thanks, she had to give honor and respect to Beyoncé. Adele publicly said that Beyoncé was who she herself would have picked, asked what more Beyoncé would have to do to win, and even ended up breaking one of her Grammys in half to share.

And what did Beyoncé do? Smile, shed a tear, and be gracious. Cuz she knew she deserved it too.

That’s why, on a night that was supposed to be about Beyoncé’s wins, the real story is Beyoncé’s losses. Just like the #OscarsSoWhite controversy, Beyoncé’s multiple losses related to a critically acclaimed and commercially successful album that deftly crossed genres, provided a deep look into her personal life, and was vocally impeccable shows just how pervasive and petty white preference can be and how impossibly high the bar is for Black people.

It’s why she wasn’t nominated for guitar and twang barn burner “Daddy Lessons” in any Country categories. It’s why 20 of Beyoncé’s 22 Grammy wins have been in R&B categories. It’s why Black musical prodigies like Prince and Kendrick Lamar have all fallen victim to a racist blockage when it comes to awards outside of R&B and Rap categories. Beyoncé’s losses show that the Grammys have a race problem, without any shadow of a doubt.

If Lemonade was anything, it was a celebration of blackness. And since the “aging white baby boomers” of the Grammy voter pool can find it within themselves to award the year’s most ambitious and musically impressive album and artist, maybe it’s time we stop valuing what it means to win a Grammy.