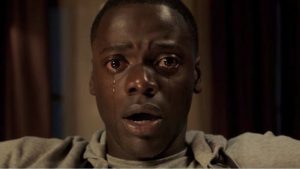 Jordan Peele is hella wrong for making Get Out, a horror story that mines racial fears for all they’re worth. It’s the latest entry into the scary movie genre that takes situations that are entirely too close to real life and turns them into nightmares that will haunt your dreams and your days.

I knew it was only a matter of time before someone created a horror movie so close to my (and so many other’s) own personal worst fears. But knowing that a Black man shepherded this into fruition makes me both immensely proud and angry to no end. There’s no one more equipped than a Black man to tell this story, and since this is now a real thing, I have to go to the movies and see it, fully knowing I won’t walk out of the theater the same.

Here are 6 reasons why you should see Get Out:

1. The critics say so

Get Out is currently sitting on a 100% rating on RottenTomatoes, a critique aggregator. This is nearly unheard of, especially for a horror film. Some of the critic comments include:

“Only a master satirist like Jordan Peele could take audiences on an insane thrill ride and make us all think about racial stereotyping along the way.” – US Weekly

“A jolt-a-minute horrorshow laced with racial tension and stinging satirical wit. How is one movie all that? See Get Out, from debuting director Jordan Peele (one half of the comic team of Key and Peele), and get woke.” – Rolling Stone

Yes, Get Out isn’t just another scary movie; it’s the scary movie to watch this year.

2. Peele is a student and major fan of horror films

After hearing how much admiration Peele has for horror flicks, I have no doubt that he put together a movie that takes advantage of all of the best tricks that have been cultivated over the genre’s history. And even knowing that the scares are coming, I’m certain he’s going to make me jump in my seat.

3. The main character is Black

It’s one thing when scary movies are just retreads of all the other scary movies you’ve seen before. But when they chart new territory, they are unforgettable. We’ve seen about a million scary movies with white people stumbling into terrifying circumstances. Get Out centers a Black man. And he’s not getting lost in the woods or purchasing a home with a history of murder or ghosts. He’s just visiting his girlfriend’s family.

4. The movie takes on White Supremacy

When you try to figure out the root cause of most of society’s ills, white supremacy tends to be the cause. This film appears to be that exact notion in cinematic form. The trailer alone has been giving me high blood pressure for months, and one of the biggest reasons for that is the helpless images of Black men. Both Chris (played by Daniel Kaluuya) and Andrew (played by Lakeith Stanfield) have moments in the trailer where they helplessly shed a single tear. That’s something you can’t unsee, and knowing that there is probably more to come has me nervous at this very moment.

5. Psychological horror is the worst kind

This movie isn’t about some monster or psychopathic killer chasing someone through a forest. Get Out is psychological. There are mind games. There is hypnotism. There are hints of modern day slavery. And that is far more terrifying than a big dude in a ski mask or undead Japanese spirits.

6. We must support what we like to get more of it

Matter of fact, just go see Get Out no matter what reason you need to justify it.