Why ‘Get Out’ Will Change Modern Movie Making 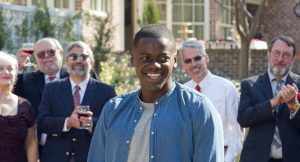 Ever since Jordan Peele’s Get Out premiered, Black folk have been praising its brilliance. In fact, the film signals a major shift in the future of moviemaking, one that treats Blackness with far greater complexity than the movies before it.

The film’s main character Chris Washington, played by Daniel Kaluuya, isn’t faced with a traditional horror film adversary. There is no homicidal killer on the loose or a sinister supernatural force intent on getting revenge. No, he faces good old-fashioned whiteness, from microaggressions to antiquated phrenology-like ideologies. Real life fears that Black people face, like the police force and appearing out-of-place in the predominantly white suburbs, set the stage for the terror that grips the entire film, but they are shown as real, present, and justified. The film effectively showed the world that this terror is real in our everyday lives. It got audiences of all races and backgrounds to take notice.

No matter how you may feel about Get Out or its messages on race, interracial relationships, and whiteness, it was an immaculately produced movie that centered Black characters. Their stories were astonishingly true to life, even though they take place in a horror film. The majority of this triumph must be hung on the film’s creator, Jordan Peele of Key & Peele fame. He personally shepherded this film to movie screens, and his dedication to perfection has led to his work being mentioned with the likes of Alfred Hitchcock. A few year ago, no one could have foreseen this coming, but this achievement is now our reality.

Luckily, Peele has “got a whole bunch planned” on the movie production front. He will continue this trend of “social thrillers” causing a shift in the genre altogether. So, this is no random event. It’s a sea change.

This is the type of cinematic revolution that many moviegoers have been hankering for. Just as in other amazing films such as Moonlight, Hidden Figures, and Fences, recent portrayals of Blackness have been groundbreaking in illustrating the vastness of the Black experience. Films like these proudly declare that Black people can be more than groundskeepers, maids, and thugs (which Peele beautifully plays off of in the film).

On the flip side, the more varied and nuanced our stories are on film, the more out-of-place the stereotypical roles will appear.

Get Out was a critical and financial success. It took the top spot during its opening weekend, earning over $30 million, and only dropped by 22% in its second week. Not bad for a movie that only cost $5 million to make. Even now, 2 weeks after its release, it’s Rotten Tomatoes rating sits at 99%. Now more than ever, it is clear that diversity sells. That means throwing in a melanated sidekick for comic relief won’t get the job done. Americans (and folks around the world) want to see realistic representations of themselves on-screen. Audiences will clearly show up at the box office to reward films that get this right.

This is important because we know that money talks in Hollywood. These business people will sink money into any project that appears to be a sure-fire hit, and Get Out‘s success on multiple fronts is bound to go a long way in pushing major studios to see minority-led films as less of a risk and more of an opportunity.

Get Out proved that minority lives can be centered across all film genres, it can be done well, and it can be highly profitable at the same time. Now maybe American cinema can use this film’s success as a blueprint to make a habit out of realistic portrayals of Black people.