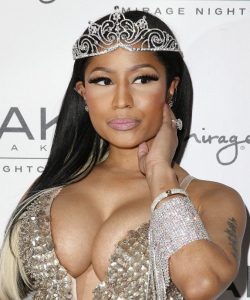 After weeks of keeping the public waiting, Nicki Minaj finally responded to Remy Ma’s “ShETHER”, but a response this weak would have been better left unsaid.

The pressure must have been hanging heavy on Nicki Minaj’s head as the world waited to hear if she was going to respond to Remy Ma’s “ShETHER”. In the time since the scathing song was released, Remy Ma has performed the song live, released another diss track (“Another One”), and gone on Wendy Williams to explain why she felt the need to drop “ShETHER” in the first place. All the while, Nicki Minaj stayed mostly silent.

But now she has released “No Frauds” featuring Lil Wayne and Drake. Nicki’s verse coming at Remy runs a strong 1 1/2 minutes and is effectively buried on a song that was released concurrently with 2 other songs (“Changed It” and “Regret In Your Tears”). Remy Ma, on the other hand, fired off 7 straight minutes of reads. And that comparison shows just how out of balance this rap beef is.

As a baseline for rap battles, if you’re going to take this long to respond, you’re better off not saying anything. There is an inverse relationship between how good your response has to be and how long you take to deliver it. After 2 weeks, she would have had to practically body Remy Ma, but Nicki’s verse is short in length and short on substance.

Nicki Minaj came at Remy Ma with a lot of the same old attacks. She’s still talking about Remy Ma not selling records. She threw out some unsubstantiated ghost writer claim. She said Remy Ma had bad plastic surgery. And in what I guess was supposed to be her strongest blows, she alludes to Remy Ma being unable to conceive children naturally and that she went to jail, leaving her family behind. Coming off of the heavy shade thrown on “ShETHER”, I am thoroughly unimpressed.

We already knew these were the easiest subjects to attack Remy Ma with, so why not come harder? Why not slowly slide the knife into her gut, twist it, and then repeat?

Remy Ma had a lot of fresh material to work with, including a lot of things Nicki Minaj would have preferred to keep private, so I’m confused as to why Nicki Minaj didn’t come harder with the little bit of material she had to work with. But then again, if the biggest defense you can mount to someone saying you’re a pop artist and not a rapper is “I make a lot of money”, maybe you proved your opponent’s point.

Nicki Minaj capped all of this off by issuing a challenge for Remy Ma to drop a hit in 72 hours. If she completes the task, Nicki will pay her $500k. Besides this being a completely unrealistic task (it’s practically unheard of to conceive of a hit, write it, produce it, release it, and have it be deemed a “hit” in that short of a span), it exposes Nicki Minaj as someone who can only find meaning and worth in commercial success.

More than anything else, “No Frauds” proved that what Remy Ma said was accurate. While Remy is a seasoned battle rapper who had something to say, Nicki Minaj is a massively successful artist who beefs with white pop stars. Her best defense is that success and the money and status that come along with it. She’s just not built to offer up anything else.

Still, I’m really happy that Nicki Minaj finally cobbled together something to say. Now I can sit back and eagerly await Remy Ma’s comeback, which is bound to be ruthless.

Listen to Nicki Minaj’s verse below: