I’m a Black, Millennial, Academic, Mom. Yes, it is harder than you think. 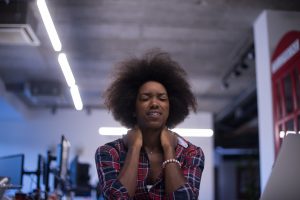 While I wasn’t really allowed to watch popular television shows for almost a decade, I vividly remember seeing TLC’s “What About Your Friends” video on The Box (or The Music Box depending on what part of the country you were in). I grew up on shows like Family Matters, Living Single, and The Fresh Prince of Bel-Air. They were constant cultural touchstones anchoring my developing Black identity.

Fast forward a few years to college. When most of my peers were planning graduation parties, I was planning a wedding. Just a year later, a baby shower. Then, two more after that. Now, at 32 years old, I am navigating the world on the margins of many social strata: the young mom of three, the older academic, the Black millennial raconteur, and even the budding career woman who still has much to learn. Even as a mother of three, I am still working through what it means to be simultaneously Black, millennial, and a mother.

It’s interesting to me because so many people will ask me questions like, “how do you do it all?” and “what keeps you going?” While I understand and respect these sentiments, they often miss how hard this whole operation is for me. It’s not just the pee pee accidents and runny noses or even the unexpected trips to the emergency room. It’s the frequent reminders that many people will see me as a unicorn of sorts. I’m “young but not really” (their words, not mine). I’m “a mom but non-‘mom-ish'” (their words, not mine).  I’m “super accomplished at everything” but “can’t ever come to the turn up ’cause kids and responsibilities'” (again, their words, not mine).

I often find myself being oggled and prodded for information and life hacks at cocktail parties. I get questions like “when do you sleep?” To which I answer, “never.” Involuntarily people apologize to me for saying they are overwhelmed with work and life because they “can’t possibly imagine how hard all this must be with a family at home and bills and stuff.” The closest most of my peers have been to relating to my daily life is telling me about how they had to race home to walk their lonely puppy or cuddle their jealous cat.

Yes. I am serious.

In the academic world, my kids are often mentioned in the classroom, a reference point for the single and mingling people I spend most of my day with, reminding them that I probably can’t come to that study sesh at 8pm on Wednesday. Faculty members are often aghast when they find out I’ve already packed up lunches, set the crock pot, dropped three kids at school, gassed up the car, and hunted for a park after driving at least two dozen figure eights around campus before arriving at my 9:30 am meeting.

Even as I write this, I am watching the clock because it’s 3:03 pm and two of said children must be picked up in twelve sharp ass minutes.

But, these are the breaks.

Data from Pew Research suggests that of mothers with graduate degrees, 54% waited until their 30s to start having children. While I wasn’t one of those women, I totally understand the decision to wait. Graduate school is probably one of the hardest things one could do in their twenties. Doing it with children in tow is just…well, sometimes it feels impossible.

I’m not complaining. I am keenly aware of the privilege I wield at this juncture of my life. I am considered middle class now. I am often read as heterosexual because of the phenotypical personification of my family. I am generally read to “have it all” since I am relatively successful in my career, family, and academic lives.

The issue with all these assumptions is that they rarely take into account the unique conditions facing women in the academy (especially Black women). They underestimate the toll of family management on women who choose to work outside of the home while attaining a graduate degree. Too often, women in these positions lack family support and community outside of their household who can help with babysitting or other emergency needs. They frequently feel the desire to carry the load solo (even when they are coupled) because they have been conditioned to bear the brunt of the responsibilities in securing their household’s needs.

These are some of the things I deeply wish others could understand.

It is already tough to be Black in the United States. To be Black and woman and mothering is even more difficult. And, being enrolled in graduate school (among many other career choices and life trajectories) adds infinite complexity.

If there is a Black woman in your life, make sure you are interrogating your assumptions about their life. Whether they be single and working, married and childfree, mothering many children or just one, think critically about the obstacles they must face each day. Check in with them regularly to see if there is anything you can do to lend support.

Most importantly, don’t assume that you understand the complexity of their (or anyone else’s) life. It makes a difference.