The Paradox and Power of the Black Professional Ball Player 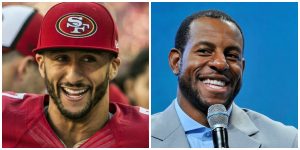 Professional athletics have long been riddled with controversy and scandal. But, there are some particularities facing Black professional athletes in the NFL and the NBA today that must be called out by name. Specifically, these athletes – sitting at the intersections of race, class, and celebrity – are especially susceptible to anti-Black behavior policing that often works to silence their performance of blackness and reinforce a white supremacist patriarchal status quo. That matters.

Two such players that perfectly embody this phenomenon are Golden State Warriors forward Andre Iguodala and prior quarterback for the San Franciscio 49ers Colin Kaepernick.

Recently, the NBA fined Iguodala $10,000 when he used the n-word several times and told reporters that he does “what master say.” The latter comments, called a “racial slur” by CBS Sports’ Kevin Ryan (someone who clearly has no clue what a racial slur is), threw pundits and sportscasters into a frenzy.

CBS Detroit’s Terry Foster said Iguodala disrespected history by “using the N word in mixed company” and played “up the stereotype of stupidity.” He also said, “The N word is not offensive to black people, just as long as it comes out of the mouth of another black person. But if somebody white says it that marks the beginning of World War III.”

What Foster is missing is that Iguodala probably speaks that way all the time. That he chose not to codeswitch in front of “mixed company” was a personal decision. It was also reflective of Iguodala’s decision not to contort himself to white norms about professionalism that often only apply to nonwhite people (let’s not forget how stringent these rules were when Richard Sherman was accused of yelling at a white reporter and called a thug for having any semblance of emotion after a contentious game).

Taking the conversation an unnecessary step further, Marc J. Spears at The Undefeated explained that Iguodala’s comments can be inferred to have been about Warriors head coach Steve Kerr, a man Spears clearly wants to invite to the cookout.

Kerr just happens to be white, but he deserves an honorary “black card” in my book. The third-year Warriors coach is as woke of an NBA coach or any coach there is in sports. Kerr has said more for blacks on social issues in the last year than many black NBA or NFL head coaches have. Facts.

If a black man had to have a so-called master, you’d better hope and pray it’s a white man like Kerr.

I’m not sure he could have missed the point any further.

Comments about having a “master” are often not an indictment of a single person. They point to a larger system of exploitation (since masters are essentially the area managers in a larger system of chattel slavery). I won’t do the wasteful work of comparing playing in the NBA to the actual institution of slavery. However, I will say that Iguodala’s implied concerns about his limited autonomy, his compensatory relationship to his overseers, and his bottom-most position in a hierarchical system that thrives on his labor are all valid.

RELATED: The Trouble With the Commodification of Athletes’ Labor

While Iguodala was likely using the terms in jest, the reactions from those in the sports community, in addition to the hefty fine, suggest that Black athletes remain limited in their freedom of self-expression. With too many offenses, they run the risk of having their career aspirations and ambitions dashed.

Colin Kaepernick is learning this lesson the hard way.

Last year, Kaepernick was the first pro-athlete to take a knee during the national anthem. At the time, he told NFL.com “I am not going to stand up to show pride in a flag for a country that oppresses black people and people of color. To me, this is bigger than football and it would be selfish on my part to look the other way. There are bodies in the street and people getting paid leave and getting away with murder.” Now, having been a free agent for several weeks, Kaep has been passed up by team after team, a fact that seems to befuddle even the most knowledgeable football fan.

Some have suggested that Kaepernick’s bad employment luck may have more to do with the quarterback market than his controversial social and political choices. Meanwhile, the sitting president has taken to taunting Kaepernick, only stoking rumors that the NFL is blackballing the star athlete.

No matter what network of motives are behind Kaepernick’s struggle to find a new home, the fact that his political choices were so controversial in the first place proves that these players must straddle the boundary between expressing solidarity and oneness with blackness while appeasing the demands of the overwhelmingly white coaches, staff, owners and fans who have no desire to confront racial, or really any, injustice.

There is an ugly side of the status quo too. It can also result in these sports organizations supporting and protecting men like Jameis Winston and Ray Rice (among many many others) who commit violence against women. It also results in multi-million dollar contracts, lavish lifestyles, and access to social networks that the average person will never experience. Many players of color rely on the status quo of professional athletics to exploit and assault women and practice levels of civic and social greed that too rely on patriarchal and misogynist norms. So, criticisms of people like Iguodala and Kaepernick that underscore their immense privilege are not incorrect.

No matter the size of the paycheck, these athletes are subjected to unconscionable levels of social and behavioral control. In the case of the NFL, the obedience to power this privilege begets can have dire consequences. As seen in the cases of both Iguodala and Kaepernick, a few slaps on the wrists can lead to inevitable unemployment. Perhaps these are some of the reasons Oakland native and Beast Mode creator Marshawn Lynch retired from the Seattle Seahawks in 2016. He coined the iconic phrase, “I’m just here so I don’t get fined” (hilariously parodied by comedians Key and Peele) in response to the stringent rules that players speak to reporters or be punished by their benefactors.

But, in the cases of Kaepernick and Iguodala, they are attempting to disrupt a status quo requirement that Black athletes be seen and not heard. They are pushing back against a system which seeks only to use their bodies for entertainment, never turning a critical lens to the system itself. They are being Black in public on purpose, and their institutions are not pleased.

I saw a meme on Facebook today that said, “If Kaepernick doesn’t get an NFL contract because he stood up for black people, black people should stop watching the NFL.” And, while I understand and agree with the sentiment, I would argue that people should have given up on this institution a long time ago. Not just Black people.

Everyone who continues to patronize organized sports like the NFL and NBA even amidst repeated instances of unequal treatment, behavior policing, and cover-ups of violence against women supports the contradictory and paradoxical environment within which athletes like Kaepernick and Iguodala are employed.

Until we can talk about and address the multiplicitous conflicts these industries create, we shouldn’t be rooting for any team or individual because the only winners will be the ‘masters’ who continue to line their pockets with our shallow consumer priorities.