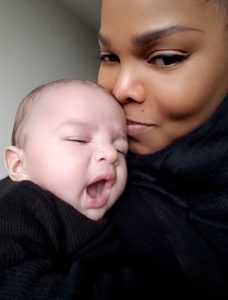 I rarely pay attention to celebrity Twitter. Not because I have some type of moralistic claim to do so. It takes too much work to know what is going on in fangirl club so and so and how that affects fanboy club blah blah. But, I, like so many other people, have been paying attention to Janet Jackson. So, yesterday, when she posted an image of her and baby Eissa “after nap,” I immediately commented on the image. That’s when folks descended in the most unnecessary ways, reminding that Black women still can’t just live out here.

I was excited when Janet announced her pregnancy. Then, I was overjoyed to find that everything went well with the delivery of her son Eissa. A few months later, news broke that she and her husband Wissam Al Mana were getting divorced. At that point, my concern was for her and her three-month-old child. Meanwhile most of the Internet pounced feverishly on the pop icon by noting the timing of her divorce, suggesting that she – THE Janet Jackson – is a “gold digger.” Really?

Panama Jackson, from Very Smart Brothas notes that “this rush to label women in these situations as gold-diggers or harlots who are just out to run a man’s pockets is unfair, especially in this case. Janet is GOOD money, fam. She probably still has checks she hasn’t cashed yet. She can go make more. Folks are outchea waiting for that next tour.”

In the original tweet, I acknowledged how stunning Janet Jackson remains (at 50 years old and after just having a baby). I said, “Eissa is adorable. But y’all. Janet has no pores. Her skin is literally flawless. She had a baby 14 minutes ago. I cannot at all with her.”

Eissa is adorable. But y'all. Janet has no pores. Her skin is literally flawless. She had a baby 14 minutes ago. I cannot at all with her. https://t.co/PIqzlU9hud

In response, I got things like “So do millions of women around the world” and “This look is achievable: simply replace your natural skin with several layers of plastic. Hire around the clock staff. Avoid open flames.” I also had a number of people who wanted to make sure I knew that makeup exists. My favorites were the ones that took pity on me because I probably don’t know about this secret software called Photoshop. One tweeter said, “Ah honey. Bless your heart. It’s called filters, photoshop and angles. But all love.”

I was even encouraged to “zoom in” on the picture to see the “strokes” from her purported re-touching.

I need folx to know that literally every celebrity has done something to enhance their faces and figures. Such is the life and expectations of celeb life. Why is everyone so fixated on Janet?

The Janet Jackson hate is bootleg and corny

It confounds me how so many people, mostly ashy Black men, come out of the wood works to trash Janet Jackson every few years. Like, is there a Hotepian bat signal alerting you that a Black woman is winning? And that said Black woman is completely out of your league and always has been?

I wrote about this phenomenon a few months ago when Serena Williams and Ciara were out in public winning again. Serena got engaged to a very wealthy white guy and Ciara got pregnant by her handsome quarterback husband Russell Wilson. Queue the troll tears. Like the criticism of Janet, most of the complaints were about these women being hoes and gold diggers, because that is the only rational explanation for them loving someone and choosing to live their lives on their own terms.

But these haters weren’t just Black men. They were all genders and all races, only making the criticism that much more confusing.

Then, I realized, that this has always been the case for Janet. Since her 2004 Super Bowl performance where Justin Timberlake exposed her breast on live television, she has worked to rebuild her career and reputation. A reputation that she never tarnished. This has had negative impacts not only on her public persona but on the types of recognition she receives as well.

Essentially, Janet can’t win. Anything she does is read through a lens of anti-Blackness and misogynoir – a particular type of race- and gender-based bias that directly harms Black women.

My biggest issue with the negativity surrounding Janet’s most recent image is that it is a simple picture: just Janet and her gorgeous baby. A mother and child. That’s it. It’s disappointing that so many people used that image – one typically protected and honored – to focus on their hatred of Black women.

In February, I brought attention to another instance of trashing a Black mother: Beyoncé. For The Root, I penned a piece explaining why the negative feedback after Bey’s Grammy performance was rooted in hatred of Black women. Not only that, it reflects the long historical arc of hatred against Black women who mother especially when compared to white women who choose to do the same.

This problem has existed since the Victorian Era. In the 19th century, white women were ordained and consecrated as the only true women. This hinged on an unrealistic obsession with women’s purity. So, I’m not surprised that Black women today are denigrated under standards that never included them in the first place.

That any Black woman who mothers in public is subjected to this sort of treatment is a negative reflection on us. But, the fact that Janet continues to grace us with her presence, despite our overwhelming underservingness, is a gift.