By Daren and Jenn 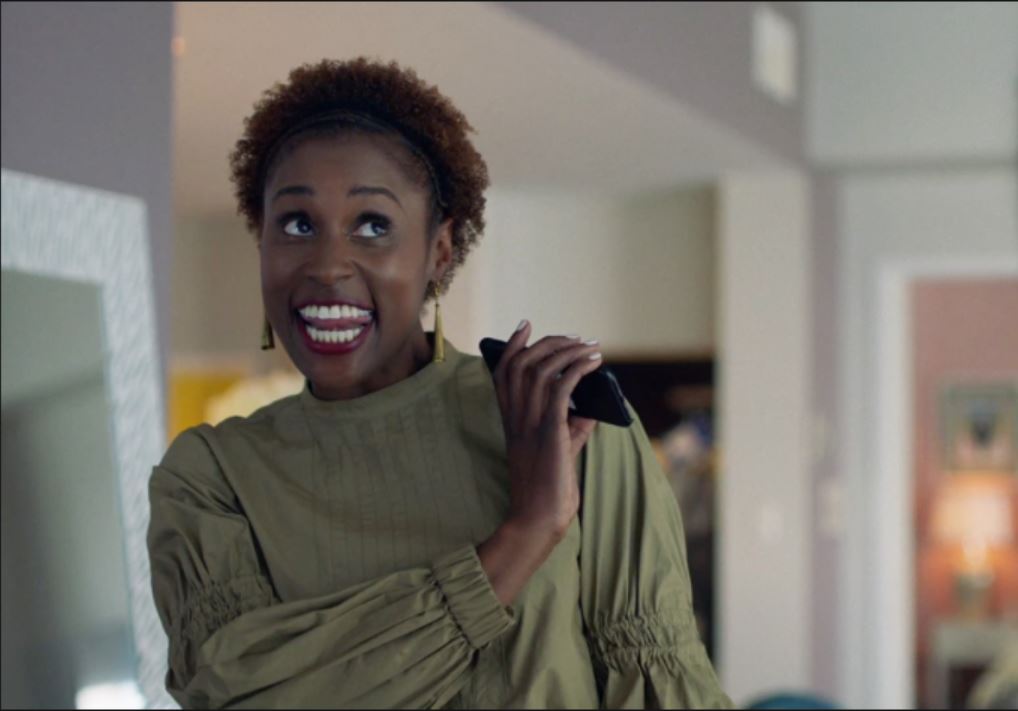 On this week’s episode of Issa Rae’s hit HBO series Insecure, we enjoyed thirty full minutes of hilarity and true-to-life Blackness. Here is our recap with some of the important themes we wanted to draw attention to from the episode.

When “Hella Shook” begins, Issa is living her best life, pumping tiny increments of gas and collecting D from bearded bae Daniel (played by Y’lan Noel). Their on-again off-again “friends who fuck” relationship has become more consistent since last week’s episode. Molly (played by Yvonne Orji) is still considering her employment options. Meanwhile, Lawrence (played by Jay Ellis) is attempting to live a normal life (jogging in preparation for a marathon, attending jury duty, texting friends, etc.). But, he is still obsessed with Issa, checking her social media on the regular.

Issa is on her full “hoetation”. She is frequently using Tinder to grab dates (hopefully better than Felix from last week). And, she hasn’t mentioned Lawrence at all. But, Molly is still in limbo when it comes to her love life. Dro (played by Sarunas J. Jackson) continues to press Molly on making their long-term friendship more sexually intimate. But, she successfully fends him off.

Issa is struggling a bit at work as her white co-worker has been challenging her stances on race, especially as it pertains to Latinx Americans. Her coworker thinks Issa is intentionally manipulating the program’s enrollment and focus to look like it is helping more Latinx students than it actually does. She might be right about that, too.

Not that we really care, but, Lawrence is somewhere else second-guessing everything he and Issa ever built together. But, his friend Derek lets him know that he “spent two years unemployed, not doing shit, letting [his] woman take care of [him].” His friend basically confirms what Tasha said two episodes ago that Lawrence is a “fuck nigga.”

Issa was so caught up staring at the sausage fest on her phone that she ran into the back of someone’s car. When Daniel comes to pick her up, she reconfirms with him that they are just friends. He agrees but it is clear he might be catching some feelings.

Cut over to Molly’s parent’s house. She finds out at their 35-year anniversary party that her father cheated on her mother years ago. Overcome with emotion, she storms out of the party, leaving Lionel (played by Sterling K.Brown) behind. Dro takes this as his opportunity to take her home. Lawrence is sitting in his empty ass living room, with cardboard boxes and a folding table, Facebook stalking Issa and her friends while drinking a bottle of Perrier.

The closing scene shows Molly in ecstasy as she and Dro (finally) act on his proposition from last week’s episode. He claims that he and his wife are in an open relationship. We’ll see how that one goes…

Daren: I love that Insecure tackled white people trying to decide if something is racist or not. Issa is clearly in the wrong for not pushing to help all of the children at her assigned school. I mean, it’s her job. And while I completely understand taking an easy win, her co-worker is in the right for checking her on it. But, too often, white people see prejudice as racism. And by putting her character in a sticky situation, Issa was able to educate her audience about what racism actually means. In a literal sense.

Jenn: Issa’s co-worker actually isn’t right though. Issa can’t be racist because she doesn’t hold power to affect change against other people of color (being that she too is subject to an anti-Black capitalistic system). It struck me how, throughout the episode, there were attempts to draw attention to potential biases that Black people might have toward Mexican or other Latinx American people: Issa mimics a popular Latinx and Spanish musical yodel and Molly’s mother mentions buying champagne glasses from the “little Mexican dollar store.” While it is absolutely true that Black people can and do suffer these biases, they 1) are not over-represented in this respect and 2) are reproducing white supremacy.

Theme 2: Appearance of the perfect relationship

Daren: I really couldn’t identify with Molly on this one, since I didn’t come from a cookie-cutter household like hers. Her reaction comes off as uncharacteristically childish to me. But it makes sense because she had invested so much in believing that the “perfect” relationship is a possibility. For that reason, I’m glad reality hit her so hard. We all have to come to terms with the fact that there is no “perfect relationship” because people aren’t perfect.

Jenn: Molly really needs to do some soul-searching on this whole “relationship goals” infatuation she has. She continues to look for a semblance of a good thing but, when she has someone who actually cares for her, she fucks it up.

Daren: One way Insecure is different from traditional comedies is how its storylines extend beyond a single episode. This season, Issa’s “hoe phase” has taken center stage, and I love that they have shown both the genesis and the maturity of Issa’s single life. While other shows make this sort of behavior look bad, dangerous, or immoral, Issa is making the most of it and feeling no shame.

Jenn: What I am enjoying about the “hoetation” Issa is embarking upon is the sexual freedom she and Molly openly discuss and embody in their friendship together. This is often relegated to the confines of male platonic coupling. I also find it to be an interesting storyline when compared to Lawrence’s lackluster attempt and utter failure at being a hoe. It is doing more than flipping the narrative. The show is also depicting a part of reality: that women often figure out strategic and innovative ways to navigate around social and societal boundaries and frameworks that place limits on our sexual freedom and exploration. Like, we just figure this shit out.

Daren: This is another storyline that has been unfolding across multiple episodes. The second Dro expressed interest in Molly, even though he is married, people have been questioning the validity of open-marriages. But this is a real thing.

Jenn: A very real thing. It shouldn’t be that difficult to understand. No one talked to Dro’s wife before shit jumped off this episode. I don’t gather that she consented to Dro and Molly taking their relationship to a physical level. Like I said on Twitter, “open” doesn’t mean do whatever the hell y’all want. There has to be consent on all sides. Molly fucked up.