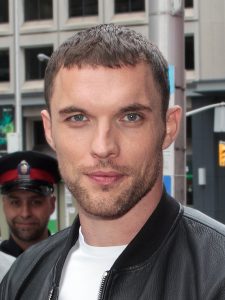 Just like so many other longtime comic book fans, I was excited to hear about the upcoming Hellboy reboot. What I didn’t expect was for the movie to cause a major whitewashing controversy before it even got out of pre-production.

The problem started when British actor Ed Skrein was chosen to fill the role of Major Ben Daimio. It didn’t take long for fans to point out that Major Ben Daimio, a notable character from the comic series, was an undeniably Asian character. In fact, the character’s grandmother was a Japanese Imperial assassin in World War II. Knowing this, you’d think ethnically accurate casting for this character would have been important.

But it wasn’t. And Twitter made sure everybody knew.

Skrein acted on this news quickly and stepped down from this role through an announcement on Twitter: 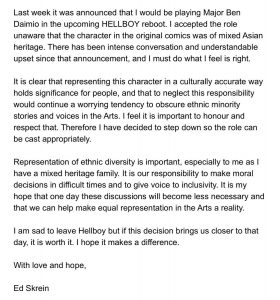 In a statement to Deadline, Hellboy producers Larry Gordon and Lloyd Levin, Lionsgate and Millennium followed with:

Ed came to us and felt very strongly about this. We fully support his unselfish decision. It was not our intent to be insensitive to issues of authenticity and ethnicity, and we will look to recast the part with an actor more consistent with the character in the source material.

What I love about this development is that it shows that Hollywood must bend to the will of the people. Television needs large audiences so that advertisers will pay for time on their networks. The movie industry needs films that will pack theaters with viewers. The entire entertainment industry is built upon creating products that people will pay to consume. If they cannot deliver in any of these respects, they fail. Their stockholders lose money. Their companies go bankrupt.

Yet, Hollywood has been slow to make the change, according to UCLA’s 2017 Hollywood Diversity Report. The report notes that minorities and women remained underrepresented on every front in the 2014-15 season. As Hollywood leans more and more on literature and comic books for source material, it will become more difficult to maintain its white-heavy structures.

And as audiences are coming to realize this, they are exercising their power. That was where #OscarsSoWhite came from. That is a major reason why Ghost In The Shell performed so poorly. And this is why every party behind the Hellboy reboot is doing their best to cover their asses and stave off any future financial losses.

This is also a great example of an actor using personal agency to decline from participating in whitewashing. Yes, Ed Skrein is a major UK actor with roles under his belt including Daario in Game of Thrones, Ajax in Deadpool, and Zapan in the forthcoming Alita: Battle Angel film. But I’m sure he was turning down a big check and big exposure with this move. This couldn’t have been an easy decision. But it proves that other actors should have and can still choose to do the same. They can’t blame the filmmakers for participating in the long history of character whitewashing.

Yet, as well-articulated as Skrein’s response was, we all have to be cautious about heaping praise on him. The fact that he was even considered for this role and accepted it without understanding the character’s background is troubling.

Furthermore, I’m concerned that Skrein tested for a character with a written and graphic history without even glancing at a single comic book. Or even running a simple Google images search. Shouldn’t he be researching a role he is trying out for before reading for it? When I apply for a job, I research the company to make sure I understand their business practices and any major news developments.

Movie watchers have been making it clear for years now that they want diversity and they don’t want characters to be whitewashed just so that studios can make more money. The question remains: when will Hollywood listen?

If we want to end whitewashing in Hollywood, we have to continue to make it clear what we do and do not support. We have to keep supporting shows on OWN like Queen Sugar and Greenleaf. We have to push for non-white and non-male filmmakers, writers, actors, and other creatives to get the spotlight they deserve.

At some point, Hollywood has to break its dependence on whiteness. And if movies based on source material with clear ethnic profiles for its characters are still struggling with this, we clearly have a lot more tweeting, shouting, and boycotting to do.