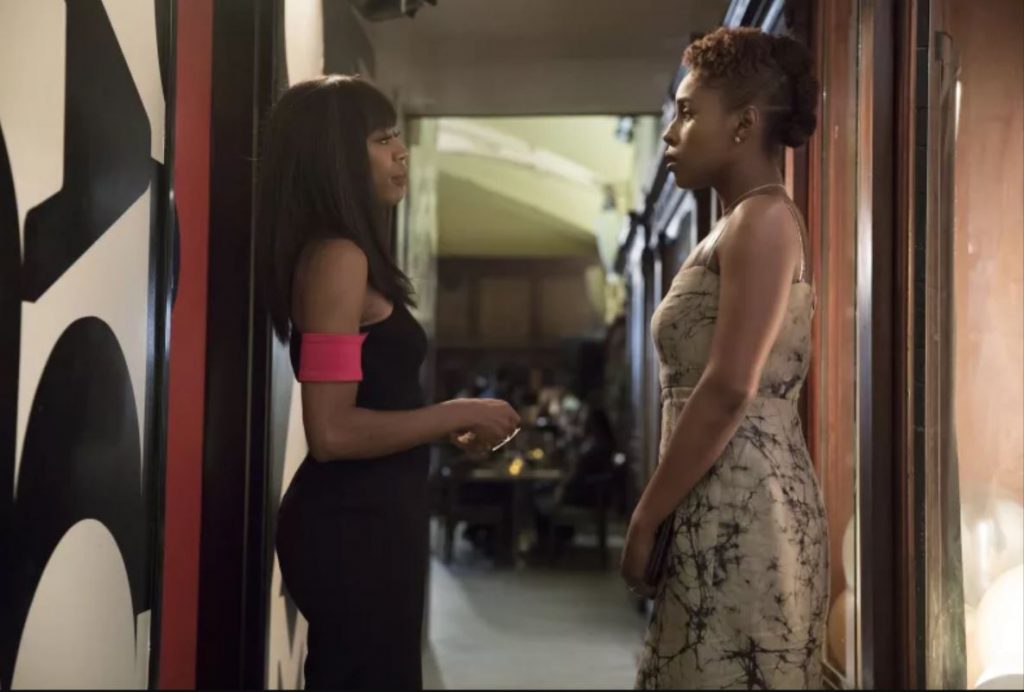 By Daren and Jenn

This week’s episode of Insecure was full of tension and drama but light on laughs. Here’s what went down:

For Issa, things went from bad to worse. She tried to mend things with Daniel after being humiliated last week, but that blows up in her face when he says that now “she knows how he felt.” She somehow takes this as a sign that he humiliated her on purpose. In response, she tells him to never call her again. Hopefully, she doesn’t mean it though.

Lawrence has started spending more time with Aparna, going out to the movies and for drinks. He tried to keep this a secret from his other coworkers, but Aparna seems to see no reason to keep things quiet. Look for this to come back and bite him in the near future.

Molly is trying to continue things with Dro and accept a relationship with no plans for a future. And every time she resists, he takes her back to bed to convince her to keep things going.

With all of that going on, Tiffany (played by Amanda Seales) plans a birthday dinner party for her man Derrick and invites Issa, Lawrence, Molly, Dro, and Dro’s wife Candace. Clearly, there was no way that this was going to end well.

Molly ends up having sex with Dro in the bathroom at the party. While still feeling the afterglow, she is painfully reminded that she really is a side-piece. Lawrence brings Aparna to dinner and immediately causes tension with Issa. Everyone literally has to scoot themselves and their place settings over so Aparna can sit down.

This bubbles over into a screaming match outside of the restaurant that has both Issa and Lawrence firing their worst at each other. Issa makes a dig at Lawrence because she is bitter that he blocked her on Facebook. Lawrence says he blocked her because he was hurt by seeing pictures of her with Daniel. Then, Issa jabs at the “Woot Woot” app that Lawrence can’t seem to get off of the ground. But it’s Lawrence who ends things when he calls Issa a “ho”. And it clearly cut her deep. She promptly went home and, after reading the rent increase notice on her door, completely trashed her apartment.

Theme 1: Sex without commitment isn’t for everyone

Jenn: Molly really wants something deeper with someone and all Dro is willing to give her is D. That’s it. I struggle with her because she rejects safe people like Lionel (played by Sterling K. Brown) and Jared (the hardworking guy from first season who didn’t make enough money for her) but then she turns around and runs into the arms of emotionally unavailable people like Dro and Chris (played by Jidenna). To me, Molly is in denial of the fact she has emotional baggage herself. She doesn’t like feeling vulnerable with her lovers. I have a feeling that is all coming to a head though.

Daren: I’m still struggling with how upset Issa is over her last sexual encounter with Daniel. I mean, did she think rainbows and streamers were going to come out? This is Sex Ed 101. And when she entered into that territory, a facial was well within the realm of possibility. My hunch is that this event was a stiff smack in the face showing Issa just how far outside of herself she had gone in trying to embrace her “ho phase”. But that “ho life” isn’t for everyone. This also highlights that the only difference between her situation and Molly’s situation is that it’s clear what Molly really wants. Molly wants a relationship like her parents’. But we have no clue what Issa really wants, and that makes it difficult to empathize with her.

Theme 2: The bonds of friendship

Daren: Better communication could have ended most of this week’s mess. But more importantly, Tiffany showed herself to be a weak ass friend. She should have known that Issa wouldn’t handle the situation well, even if Lawrence didn’t bring a date.

But the best moment of the whole episode was when Molly ran into Issa as she was leaving the bathroom. They said very little, but they saw each other’s hurt and imperfection. It was very artfully executed, and against an episode that was very blunt, it was nice to have a beautiful moment.

Jenn: I think the bonds of friendship are also acting as enablers for both Molly and Issa though. Earlier in the season, and late last season, Molly and Issa would challenge one another on their respective BS. They have been much more supportive of each other now but maybe that is out of fear of losing the friendship again. Either way, it isn’t healthy and it isn’t setting either of them up for success.

Daren: While most of the attention on Insecure is paid to the romantic relationships, I was glad to see some maturity show up in Issa’s work life. Frieda, as white and well-meaning a she may be, was right that Issa has a responsibility to aid all of the kids at her school. And the fact that Issa could swallow her pride and actually partner with Frieda on getting things turned around is one of her best displays of character yet.

Jenn: This episode had me deep in my feels. DEEP. That dinner party was quintessential “behave yourself in public and don’t embarrass ya mama” for all parties involved. And, while the nuclear fall out afterward between Issa and Lawrence was hard to watch (he really took it extra far calling Issa all types of hoes), it was good that they both finally got to say what they needed/wanted to say. And, by the end of the episode, Molly was moving further from Dro.

In the end, this episode showed that sometimes, you just have to get a little sick of yourself before you really get better. I hope next week’s season finale isn’t as tragic.