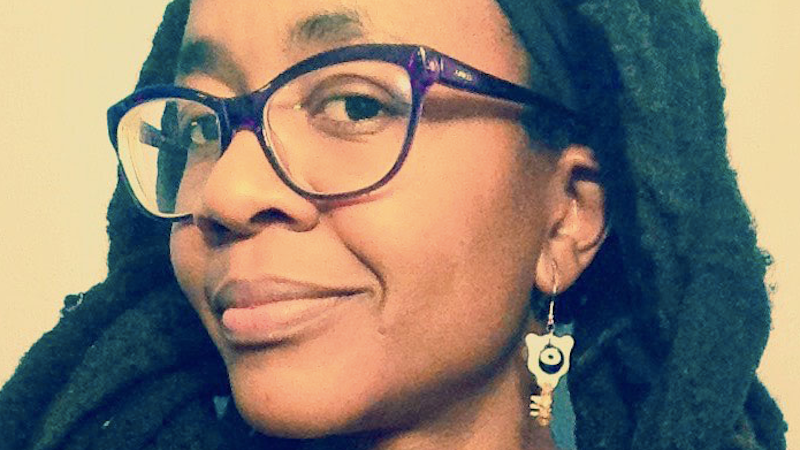 As announcements about a new HBO series based on Nigerian American fantasy and sci-fi writer Nnedi Okorafor’s novel Who Fears Death have come out, I’ve noticed that the main thing missing from the headlines is astoundingly simple: her name.

This troubling development shows how easily Blackness can be co-opted. It also shows how Black people, especially women, are erased from our own work.

And, Nnedi Okorafor is kind of a big deal.

The story takes place in post-apocalyptic Sudan and follows magic power wielding lead character Onyesonwu as she goes on a quest to defeat her sorcerer father. This is a beloved story for many Black people. And now, in the wave of Hollywood finding value and worth in the work of Black folks (like Wesley Lowery’s They Can’t Kill Us All, James Baldwin’s If Beale Street Could Talk, and Manning Marable’s Pulitzer Prize-winning Malcolm X: A Life of Reinvention), HBO has officially signed on to adapt a series.

This is exciting news. But I almost missed it because nearly every headline I read about it omitted Okorafor’s name. Here are a few examples:

Deadline couldn’t even be bothered to spell her name correctly when it did make mention of her. “Okorafo”? Really? 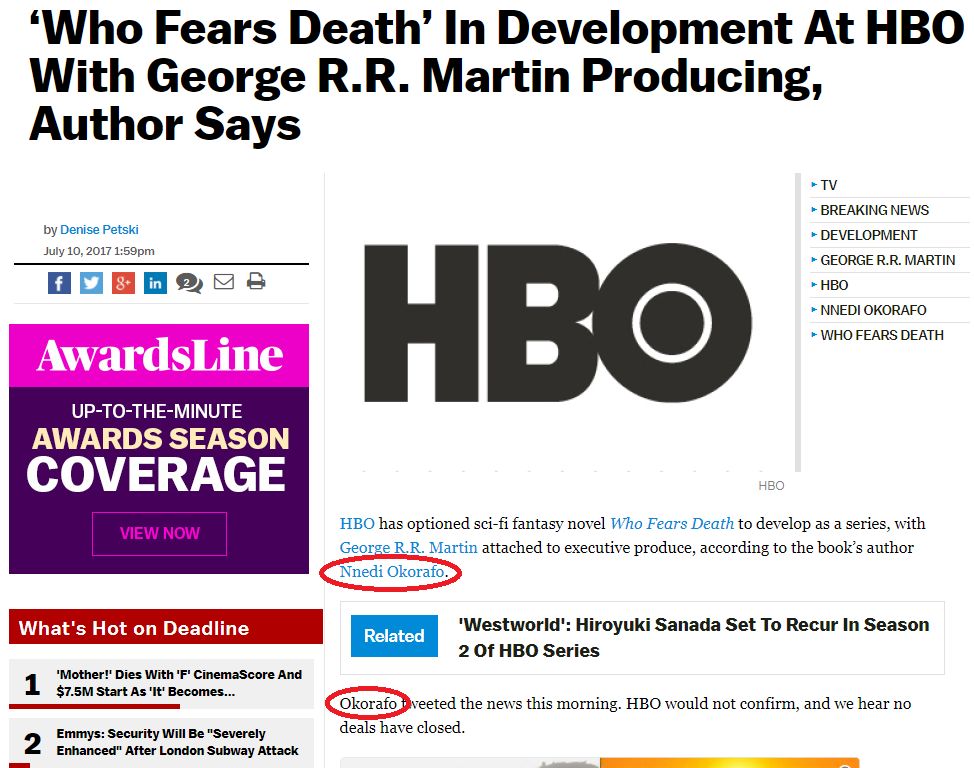 In response to articles that didn’t prominently feature her name and cropped images of her book’s cover to eliminate her name, Okorafor let the world know how she felt on Twitter.

"Afrocentric"….at least say Afrofuturist, yeesh. Get with it. And *I* wrote the novel being adapted.

If I was in her shoes, my response wouldn’t be nearly as nice.

To be frank, this is not a normal practice. Hollywood makes a habit out of mining the literary world for content. When these projects are announced, the author’s name is usually treated as vital information. Yet in these Who Fears Death announcements, you often have to read deep into the articles before her name is even dropped.

I’ve also been watching the same phenomenon happen with announcements for the film The Hate U Give, based on the book of the same name. Its author, Angie Thomas, has received the same treatment.

Even more problematic for Who Fears Death is the name that has been featured: George R. R. Martin. A white guy. Who didn’t write the book.

Yes, the same George R. R. Martin who writes the Game of Thrones novels (titled A Song of Fire and Ice). The same novels that largely depict people of color as a race of slaves. He has been attached as an executive producer, and the media has latched onto his involvement.

Sure, any project Martin is involved in is bound to garner a ton of attention, but this does not justify Okorafor’s erasure. In doing so, the media is ranking the two on their own hierarchical system, with Okorafor’s name almost always losing the battle.

Make no mistake: I’m sure Okorafor is getting paid the hefty sum she deserves for her work. But this type of public invisibilizing of her intellectual contributions has the potential to undermine the value of any of her future work. The more valuable and recognizable her name is, the more she can demand in contract negotiations. If another person’s name is more closely associated with her work, it is impossible for us to even quantify how much she stands to lose.

This is a prime example of how the white Hollywood industrial complex loves to commodify Blackness while erasing Black people in the process. Stealing Nnedi Okorafor’s recognition denies her the respect that she deserves. It also shows the unique ways that Black women’s work is erased, co-opted, and undermined in all sorts of venues.

It’s no easy feat to write a novel (trust me, I know firsthand). And the publishing process can take years. Imagine that you spent years toiling on a project with zero assurances that it would ever be published and read by anyone other than your friends and family. And when it was published, it was largely successful, praised, and awarded. Then finally, when HBO — of all places — options your content for a TV series, media outlets not only barely mention you but basically credit an old white man for your work. Personally, I would be livid. And I don’t face nearly as many oppositional forces as Black women do.

So what do we do with all of this information?

In the short-term, we point it out, hold folks responsible, and make it right. In order to do this, we have to understand the value of our work. We have to fight the structures and people who are benefiting from co-opting our work. Blackness is only vulnerable as long as we are not there to protect it.

But in the long run, we have to disinvest from mainstream, white media. We have to invest and elevate our own media outlets that service us (like Shadow and Act) If we don’t, I can guarantee you that no one else will.