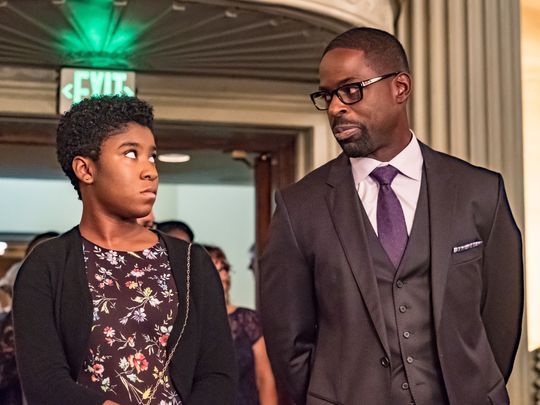 I have written about NBC’s Emmy-winning hit show This is Us before. Once to critique the show for its (mis)handling of fatness and at another time to praise it for its depiction of anxiety and depression. But, I have never written in any real depth about how the show deals with (or attempts to deal with) race. I am realizing I am conflicted where this issue is concerned.

I have to start by making an admission. I was fourteen or fifteen when I saw my first bootleg copy of a Tyler Perry play that someone had sold my mom outside of a Blockbuster in Oakland. We had heard there was this amazing actor, writer, and producer on the chitlin’ circuit who was innovating stories about the Black Experience. And, as I watched the grainy cassette tape of “I Can Do Bad All By Myself,” a story about abandoned Black girls, sexual abuse of Black sisters, and a family of women doing all of the emotional labor to hold their family together despite the general absence and ambivalence of their male counterparts, I remember feeling heartened by the fact that “our stories” were being told.

As years passed and Perry made more and more films depicting Black women’s lives as inherently about deprivation, loneliness, the absence of sexual desire, mammydom, and a general distance from their own identities outside of the male gaze, I slowly came to the conclusion that having just any ol’ body tell our stories would never suffice. Not only that, our stories require finesse, nuance, and deliberation that the heavy-handed, misogynistic touch of Perry could never really take full stock of.

That’s why, when This Is Us first aired, I wasn’t quick to become a viewer.

I was apprehensive about putting faith in NBC to do any justice with the melanated characters who so many of my friends and fellow-sitcom consumers were enamored with. Further, the mere idea of watching a story about a Black family that is only really seen as valid and television-worthy because of their linkage to a white family didn’t sit well with me. But, over time I relented. And, while the show has handled some storylines incredibly well (especially those dealing with loss, grief, and mental illness), it still paints a picture of blackness that is patriarchal, elitist, class-oriented, and anti-Black in many respects.

This became clearest to me as I watched the storyline unfold with Randall Pearson (Sterling K. Brown) and Beth (Susan Kelechi Watson) as they endeavored to adopt or foster a child during the final episodes of Season 2.

In summary, Randall and Beth quibble over whether or not to adopt. And, in the end, they decide on fostering an older child who is less likely to be adopted. This is something Randall feels strongly about given his own adoption story. Soon, 12-year-old Deja (Lyric Ross) is placed in their household. Randall immediately begins raising his voice around her and entering her personal space without consent (two things that are extremely triggering for her since she is coming from an abusive home). As we meet her mother Shauna in Episode 7, Randall and Beth show her little grace. Instead they shame her and prop Beth up as the ideal Black woman while Shauna is positioned as a failure. When Shauna is released from prison and wants to pick up her daughter, Randall’s and Beth’s first instincts are to pursue legal means to keep Deja in their home, believing that Shauna is an “unfit mother” who lost rights to her child when she became incarcerated. This predictable and disappointing storyline lingers on until the family decides to let Deja go back to her mother, a moment we are supposed to see as a point of personal growth.

As the fostering story unfolds and eventually comes to a close, we are given a glimpse into an ugly reality about the Black members of the Pearson clan: they, too, are anti-Black.

In many ways, Randall is an elevated Hotep. He still refers to his wife as “a Black queen”, quit his job because he was stressed out, makes corny jokes all day, and believes all of these behaviors are okay because he has a six-pack. While he is endearing at times, he is also incredibly patriarchal, rarely including Beth in his major decisions like when he simply moved his ailing (read: dying) absentee father into their home without so much as a text message or quit his lucrative job on the heels of a major project. These behaviors aren’t just about anxiety. They are also ways that Randall exerts male-energy in the household and reinscribes gendered binaries between himself and everyone else with whom he shares the home. It’s gross.

Then, there’s Beth, many folx’s most beloved Black member of the extended Pearson family because of her quiet depth and firmness in the face of what seems like constant family turmoil.

While I agree that Beth is a nuanced character whose blackness is clear and unapologetic, it isn’t lost on me that she is also significantly lighter in skin tone than Randall, college-educated, and working a high-paying office job (since Randall quit his). In many ways, she is the counter-stereotype, the bourgie rejoinder to generations of misrepresentations of Black women on-screen from Hattie McDaniel’s Oscar-winning performance as “Mammy” to Nicki Minaj’s continual role as sexy secretary alongside a mediocre white professional woman. But, sprinkling lines about coconut oil and durags on top of traditional classist, elitist, Jack and Jill, debutant ball-style Blackness does not more representative television make. This is especially true when those characters actively struggle with their own anti-Blackness and frequently benefit from their proximity to whiteness to carry their storylines.

But, maybe I am asking for too much. Maybe the answer here is that Blackness is so diverse that it will necessarily have to include the anti-Black too. Perhaps.

Maybe because Randall is a member of a white family, he is still working through some the lessons he learned from the racists who told him he wasn’t good enough because of the color of his skin (including his adopted maternal grandmother). Perhaps that is true, too.

Aside from Queen Sugar (which I argue is the best representation of Blackness on TV in this generation), we rarely even have shows that give a picture of multi-classed or multi-racial Black families without relying on predictable stereotypes and caricatures. And, this is a show that remains under-recoginized for its sheer beauty and the deliberate delicateness with which it handles the intricacies of Black life and love.

As always, I am gratified to see Black people on television. I am just looking forward to the day when I see more of us reflected back through them.